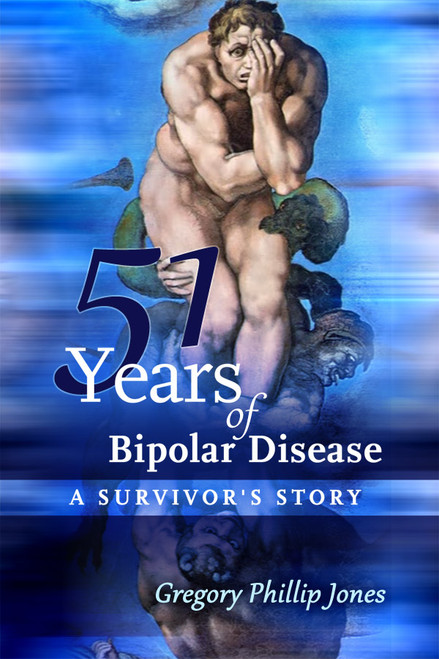 Gregory Phillip Jones’ severe depression began at age nine. With the exception of his mania (at age twenty-eight) – an ecstatic, joyful experience which lasted two weeks – his depression lasted until he was fifty-nine-years-old.

In 51 Years of Bipolar Disease: A Survivor’s Story, Gregory writes about his severe depression in childhood, his joyful, sublime manic experience, and the horrifying depression which followed the mania and lasted for decades. Gregory’s third psychiatrist, who treated Greg for twenty years, was never able to stabilize his emotional life, despite the use of dozens of anti-depressants and anti-psychotic medications. Lithium prevented a reoccurrence of mania, but destroyed his kidneys. To keep from committing suicide, Gregory underwent forty-nine or fifty ECTs (electro-convulsive treatments) for his depression. In 2015, Gregory’s new psychiatrist was able to stabilize him and he is now healthy for the first time in many decades.

Gregory Phillip Jones grew up in Illinois. He has lived in Carlinville, Decatur, Jacksonville, Pittsfield, Summer Hill, and Jerseyville. He lived in Franklin, Kentucky, for five years.

Gregory attended Western Kentucky University, majoring in philosophy and sociology with a minor in English.  Gregory developed an intense and lasting interest in Shakespeare and some of the giants of nineteenth century American literature – Dickinson, Poe, Thoreau, Twain, and Whitman. Greg was the valedictorian of his class.

In his twenties and thirties, Greg was a dedicated jogger, canoeist, tennis player, bicyclist, and swimmer. At age forty-five, he became a competent hackey-sack player. His bad back and poor balance now make all of these favorite activities impossible. To keep in shape he now rides an adult tricycle.

Playing the piano has been one of Gregory’s favorite pastimes since age five. Scott Joplin, Chopin, and Schuman are among his favorite composers. Due to his right pinkie being turned downward, Greg can no longer play Scott Joplin’s music. Greg’s brother, a classical guitar whiz, introduced Greg to classical guitar music, which Greg plays on the piano. In the future, Greg hopes to play the cello and flute.