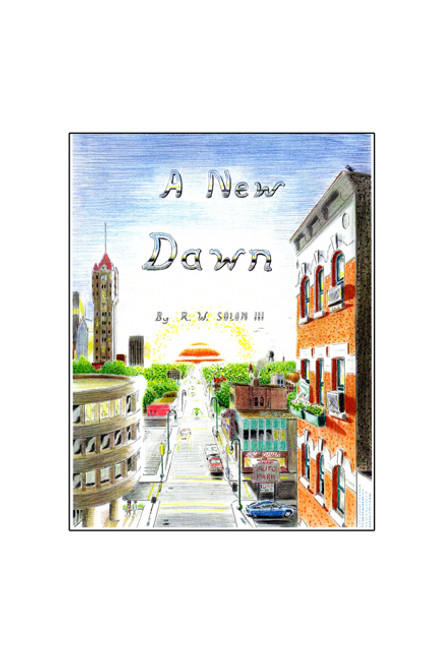 by RW Solon III A New Dawn is a picture book that examines the way we think and behave as a society and as a country. Since the 1960s, the popular culture in America has been in a downhill spiral. It has gotten louder, less congenial, and more vulgar and brazen as time goes on. It programs and conditions our young for a lifetime of mediocrity and failure. This book suggests a dangerous slide toward totalitarianism as people continue to focus on nothing but self-gratification and the trivial choosing to delegate their thinking and responsibilities to others and the government. A New Dawn reflects the frustration of the average American who sees his or her country as a place to make others richer while he runs in place, barely able to get by. This book is intended to foster or encourage a new awareness among our citizenry to resist the popular media and culture and to view the government with healthy suspicion and skepticism. A New Dawn encourages the reader to make our country a better place by resisting the popular culture and living their own lives, not the lives the media or the government want them to live. ABOUT THE AUTHOR RW Solon III is a motor coach driving instructor for Greyhound Lines, Inc. Prior to Greyhound, he served his country by completing a twenty-year career in the United States Army. While in the Army, he worked in the U.S. Army Transportation Corps and served two tours of duty in Korea and Germany. He was born in Racine, Wisconsin, and has lived most of his life in the Northeast and Midwest. (2008, paperback, 60 pages) Availability: Usually ships in 2-3 business days.
×