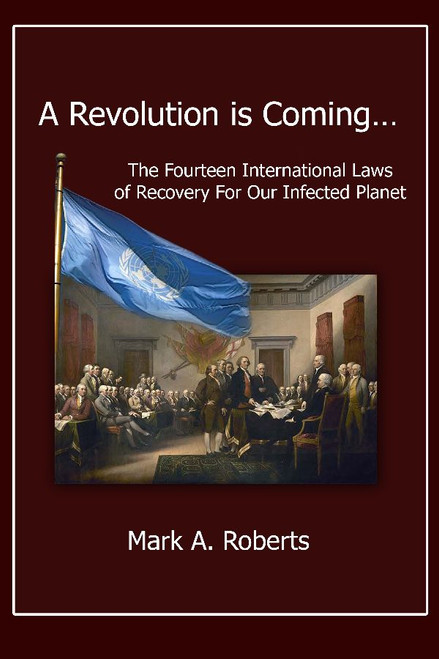 A Revolution is Coming The Fourteen International Laws of Recovery For Our Infected Planet
by Mark A. Roberts

The author was born in 1950. It was another year of war. He was told all his life that nothing can be done about war or the horrors of nuclear weapons and those who would use them. Nothing can be done about the poisoning of pristine air and water, ignorance, poverty, starvation, crime and greed associated with drugs, deforestation, religious conflicts, racial hatred, disease, overpopulation...

The author has concluded that total destruction can be stopped, but international law and order must be initiated. International law must be instituted and enforced. The United Nations must complete its journey of leadership and strength. The United Nations must exemplify a non-corrupt representative leadership all continents, nations and people of the world community equally represented. The present five prong military dictatorship of intimidation must end. The time has come for a world community government founded within the United Nations.

Mankind has proven throughout history that he is incapable of governing himself. Will mankind survive? Will this manuscript be used by evil men for evil purposes?

This author believes that only through supernatural intervention will a world community government of long term peace and prosperity prevail divine leadership.

And I saw a beast coming out of the sea. He had ten horns and seven heads, with ten crowns on his horns The beast I saw resembled a leopard, but had feet like those of a bear and a mouth like that of a lion... He who has an ear, let him hear

God Almighty!: A Sober-Minded View of Our Lot on Planet Earth - eBook