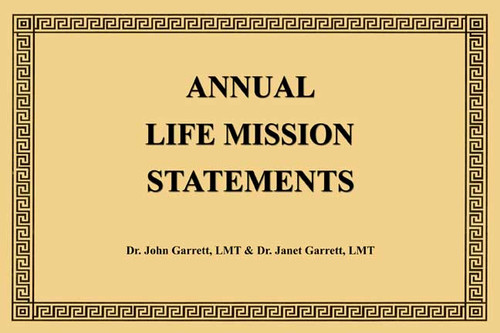 by Dr. John Garrett, LMT, and Dr. Janet Garrett, LMT This special research project has been a rewarding labor of love for these two authors. For many years, they have diligently and prayerfully sought inspiration as they have collected, categorized, and compiled meaningful statements on the mission and purpose of life. In their first book, Life Is a Mission, they researched and found twelve values to guide them to their own specific personal missions in life. When combined, these twelve values create spiritual synergism. They have carefully selected 366 meaningful statements relating to these twelve values and the mission and purpose of life. These 366 statements are individually dated from January 1 to December 31 and may also be used as an annual perpetual calendar. As individuals read and meditate upon these Annual Life Mission Statements on a regular basis, combined with the beautiful landscape photography provided by talented master photographer, Norman Stevens, M.Ed., we hope and pray they will also come to decipher and learn more about their own specific personal missions in life. ABOUT THE AUTHORS Dr. John Garrett, LMT, is originally from Glendale, California, and Dr. Janet Garrett, LMT, was raised in Holden, Utah. They met at Brigham Young University in Provo, Utah, following Johns two-year LDS mission to Chile, South America. They were married in the Salt Lake Temple and have been blessed with six children. John lettered on the BYU Varsity Track Team and also competed in the World Games held in Helsinki, Finland. John earned his university degrees in the following academic career majors: Education and Spanish, Counseling and Guidance, and Early Childhood. John has also served as a Branch President and a Temple Worker, and he presently serves on the Stake High Council at BYU in Provo. Janet earned her university degrees in the following academic career majors: Education and Child Development & Family Relations, Counseling Psychology, and Behavioral Science. Additionally, they pursued further education and received post-doctoral certification training and are serving professionally as Licensed Massage Therapists (LMT) and Life Mission Trainers (LMT). Besides Annual Life Mission Statements and Life Is a Mission, they are also authors of Your Foreordained Mission. For many years, the authors have professionally assisted numerous individuals in their search for their own specific personal missions in life. Janet has also served as a Stake Missionary, Institute Instructor, and a Church Service Missionary at the Missionary Training Center in Provo, Utah. (2006, paperback, 370 pages) Availability: Usually ships in 2-3 business days.
×

A Statement of Faith

Answering the Call to Serve

Apocalypse 1: The Pen is Mightier Than the Gun: Ecclesiastical vs. Secular