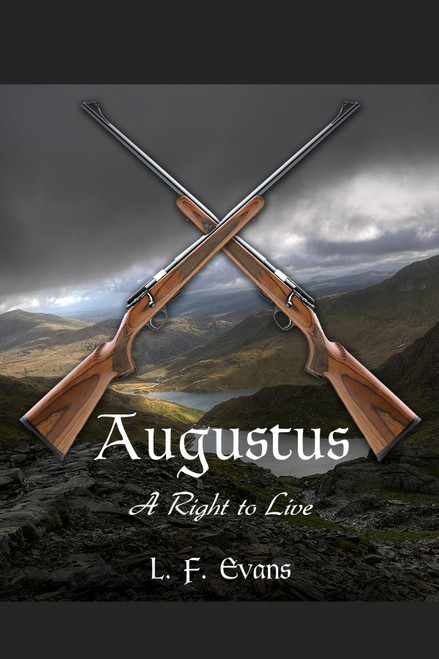 Augustus: A Right to Live
by L. F. Evans

Gus was a hard drinking, mean, fighting Irishman, on his mother's side of the family. A master carpenter, Gus goes to Iowa to build a house for his brother. But his brother looses his wife, Mary Dan, in childbirth, before the place is hardly started and looses interest, sending Gus and his wife home on a bad note.

The Irish believe that if it rains on a fresh grave there will be another death, within the year. It rained on Mary Dan's grave and the superstition comes true: Gus' wife and his sister die a year apart.

Gus drinks harder and fights harder; until the local madam gets involved and tries to save him. They see each other on a regular basis and she pulls him from his doldrums back to sanity. The whole thing gets involved when she and all the women in town begin trying to marry him off.

Gus meets his Annie, who is being badly beaten by her husband, one night as he goes to have a drink. To get away, he goes to Nebraska for the winter and the story concludes from there.

What is there to say? I'm 75 and have had the privilege of listening to stories about this family for all 55 years of marriage. I was born and raised in West Middlesex, PA, when the other girls were planning on marrying doctors and lawyers; I always said one day I would marry a cowboy and live out west.

I've accomplished that and then some. Raising four children, while showing cutting and rope horses was never boring, being married to a "real cowboy," was never dull. There in lies another book.

Augustus was my husband's grandfather. My husband never knew the man; all he was ever told was that he was a mean s.o.b. So with my husband's permission, I decided he needed to meet his grandfather and he loves the story. I hope you do, too.

To Teach Like Mary: Getting It Right at First

Doing the Right Thing - Every Time!!!

Art of the Heart: How to Understand and Help People with Alzheimer's and Related Disorders, Book I