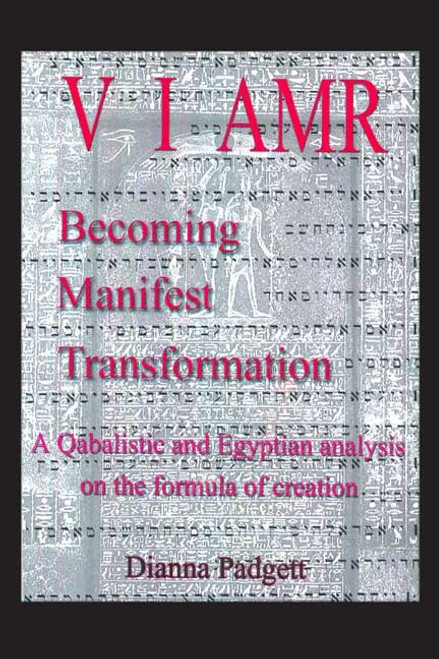 by Dianna Padgett "V I AMR," or "Becoming Manifest Transformation," is the numeric-based translation of the first four chapters of Genesis taken letter by letter. Moses employs the motif of the seed-bearing plant, or the H'ShMIM, which has within it all the elements necessary for the expression of the growth of reality out of potential and the directive force of Will. It describes the very simple, yet powerful process of the active use of reception, which initiates the Primum Mobil, or First Movement. In these four chapters, the Tree of Life is defined three times via the use of the V I AMR statements, which define the Sepheroth. There is an analysis of the Sepheroth revealed in this manner in the commentary, as well as an analysis of the letters and the way Moses used them. Also in the commentary is a comparative analysis of Moses' text and the Egyptian Creation Myth, which describes the way reality "works." The engine that runs reality is perception and the duality of the seer and the seen. This duality is a reflection of the "Not" and the "Is" in that the True Self (the Seer) is at home in the Not and perception creates the Is. ABOUT THE AUTHOR Dianna Padgett was born in Beckley, West Virginia, in 1949, and has been studying the Qabalah for about thirty years. For four years, she underwent intensive study in the "International Order of Hermetic Knowledge" in Charlottesville, Virginia, and attained an extensive understanding of the Qabalah, Eastern philosophies, and a variety of other disciplines. Her Hierophant gave her a sturdy foundation on which to build an understanding of a wide range of disciplines. In 1997, Dianna wrote and published The Reconciliation of James Douglas Morrison, which is an alchemical treatise of the Tetragrammaton as applied to the life of Mr. Morrison. Currently, she is in partnership with Brad Branson to produce an analysis of the Book of the Law. (2006, paperback, 274 pages) Availability: Usually ships in 2-3 business days.
×

Because They Love Me

Beauty Of The Dark