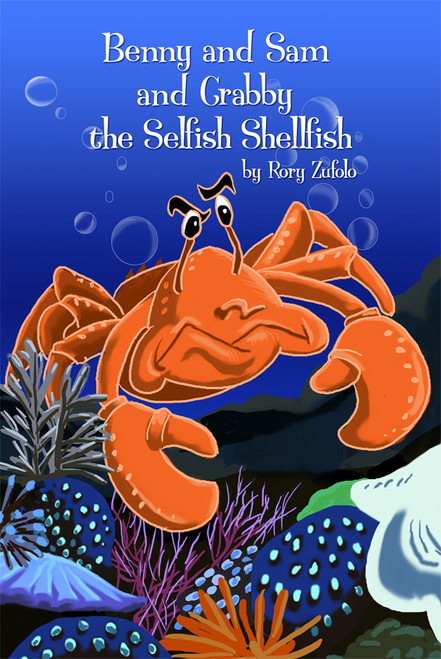 Benny & Sam and Crabby the Selfish Shellfish
by Rory Zufolo

I believe that selfishness is one of the foremost reasons for families being dysfunctional, for the famines in the world, and even for wars. There is more than enough for all in this world, and when we care about each other we will make sure that everyone has what they need.

Benny & Sam is an early example of where selfishness begins, and so it is an attempt to stop it before it can grow into the monster it can be. Benny and his sister, Samantha, were born one year and one day apart. Every year everyone celebrated their birthdays together, and they never got to have the individual attention they wanted. So a brother and a sister who were so close in age were hampered from being as close in relationship as they could have been.

Meeting a crab by the name of Crabby was the best thing that could have ever happened for them to appreciate each other. Crabby's story of losing his family because of his selfishness really hit home for the Benny and Sam, and it was a life-changing event. My hope is that if there is selfishness going on now in your home, Crabby's story and Benny and Sam's story will be all it takes to reverse the course and bring sharing into the hearts of all.

Rory Zufolo was born in Passaic, New Jersey, in February 1956. His father and mother, John and Kathryn Zufolo, and Rory moved to California when Rory was nine years old. They moved to what is now known as Atwater Village in Los Angeles. Growing up in Atwater was like growing up in the neighborhood in Leave It To Beaver. It was a small-town neighborhood in the middle of the big city, just north of Dodger Stadium and on the outskirts of LA and Hollywood. Growing up, Rory and his friends shared everything, but as he became a parent of four kids, he saw that wasn't always how they acted. So being selfish was something he became quite aware of, and he wanted to show how selfishness will never bring satisfaction. So from this desire was born Benny & Sam and Crabby the Selfish Shellfish.