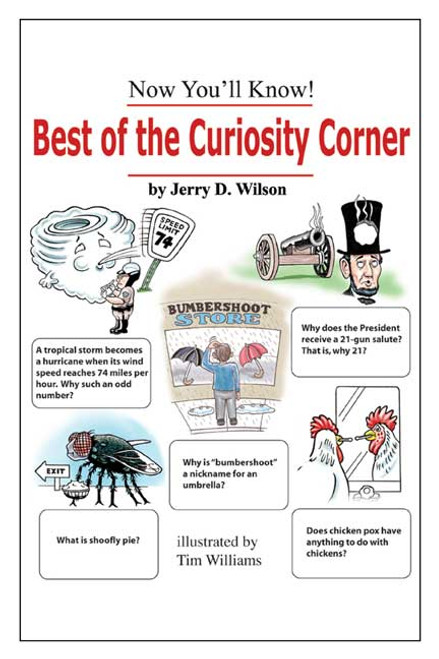 by Jerry D. Wilson Best of Curiosity Corner presents unusual information on a variety of topics. This is done in a humorous, easily read question-and-answer format. The Curiosity Corner is a newspaper column that has been published for the past twenty-four years. Have you ever wondered: why a tropical storm becomes a hurricane when the wind speed reaches 74 mph? (why 74?)
what is it, duck or duct tape?
what are the origins of golf terms such as par, fore, bogey, and birdie? Each question is followed by a Curious Postscript (C.P.S.), intriguing quotes from a mix of people. For example: C.P.S. A good sermon should have a good beginning and ending, and not too far apart George Burns. ABOUT THE AUTHOR Jerry D. Wilson is Emeritus Professor of Physics at Lander University in Greenwood, South Carolina. He has authored and co-authored physics and physical science textbooks for over thirty years, with seven titles in total. Most recently College Physics, 6th edition, Prentice Hall (2007), and An Introduction to Physical Science, 12th edition, Houghton Mifflin (2008). Dr. Wilson has written a newspaper question-and-answer column since 1982. Originally called Science Corner, the column answered science-related questions. Over the years, a variety of non-science topics were addressed and the name was changed to Curiosity Corner to better reflect the general content. (2007, paperback, 202 pages) Availability: Usually ships in 2-3 business days.
×

Corners of an Eye - eBook

Back to Our Roots: Food for the Gods! (Cooking for the Control of Sickle Cell Anemia and Disease Prevention)