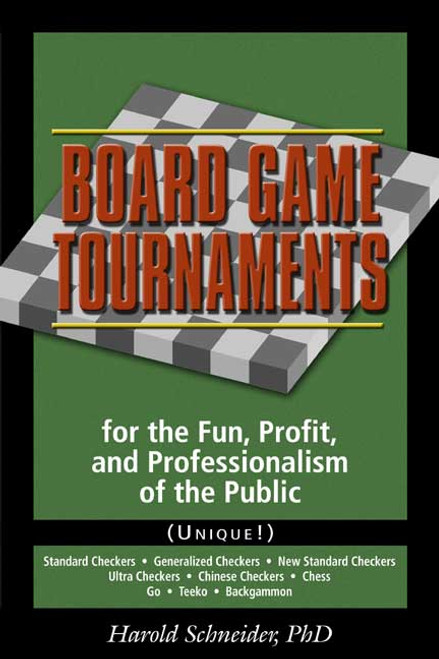 by Harold Schneider, PhD Checkers is a fascinating mind sport! The rules are simple and practically everyone has either watched or played a game. Checkers has been played for centuries, and based on historical documents, it originated in Egypt over 4,000 years ago. Checkers is played around the world and is known by different names in different countries: "Draughts" in England, "Shaski" in Russia, "Damden" in Germany, and "Dames" in France, for example. But no matter what you call it, excluding the game of romance between men and women, checkers is the number-one game in the world. This book introduces each person of the general population to a unique FUN way of making a new recreational living or profiting hansomely (!!!) via 1-day Board Game Tournaments ("BGT") centered initially about the familiar game of Checkers for the overpowering reasons stated & proven beyond any doubt herein, with 50% of the entrants as "BGT winners" in each 1-day tournament with 1 game per opponent & 8 opponents/day selected by random draw. The details are provided. Checker tutorial material (+ Brand New Improvements on Checkers in Appendices D,B,C), is abundantly supplied herein. A highly recommended new contract bridge scoring system is also included. BOTTOM LINE: Book explains how whatever group of readers forms to start "BGT" to the great benefit of society, legally, honestly, & morally as described, will/can profit beyond their wildest dreams. Checkers is an unexcelled fascinating mind sport, totally UNMASTERABLE & INEXHAUSTIBLE (proven beyond any doubt herein!!!!.) The rules are simple & virtually everyone has either watched or played a game of checkers. It has been played for centuries originating in Egypt over 4000 years ago & is played in many countries around the world under different names. Excluding the game of romance between men & women, it is the #1 fun game in the world!!! The reasons will/should become apparent by the reading of this book. (2006, paperback, 258 pages) Availability: Usually ships in 2-3 business days.
×