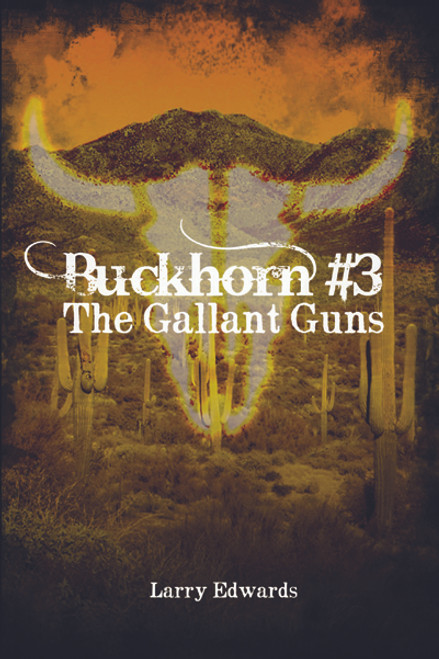 Griff Buckley: the tall, implacable Texan, who reluctantly provides the driving force to keep the fugitives pushing on in their quest for freedom.

Joaquin Valdez: young aristocrat of the Mexican hierarchy, has never before fired on another human being but he learns fast.

Armida and Marita: his twin cousins, unwilling fugitives from one of the most notorious gangs of cutthroats ever spawned, Ben Callendars raiders.

Becky Gage: daughter of a well-to-do Tucson horse rancher, drawn into the race for life when the train she is riding is attacked by Pancho Villas rebels.

These are the gallant guns, a hard-bitten drifter, a young scion of Mexican high society, his two cousins, and a young ranch girl. All they have to do is fight their way through Callendars outlaws, Villas raiders, and make their way safely through some of the most rugged territory in Sonora, including the deadly Sonora Desert.

Theyll make it. Or die trying!

Larry Edwards is not only the author of more than twenty books; he is a veteran, accomplished singer, songwriter, musician, and recording artist on several (traditional) country western labels, including the once prestigious Starday label. He now records on his own label, Desert Winds Records, with three CDs to his credit and numerous singles. He also has a video on YouTube which is a tribute to American military personnel.

Born in Delaware, Ohio, Edwards now resides in Arizona, a state he loves to write about. He also spent a hitch in the US Navy. He still performs and sings around the Phoenix area. He is the father of four grown children, who have their own families.