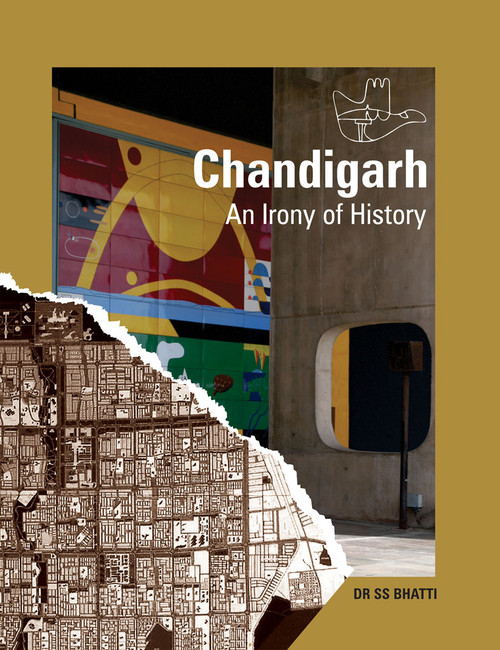 Chandigarh: An Irony of History
by Dr. SS Bhatti

is the richest exposition, with an enlightened evaluation, of actual Chandigarh, which grew out of Le Corbusiers planning theories and their realisation.

It comprehensively deals with Town Planning, Architecture, Urban Design, Landscape, Art, and Services, in the context of Le Corbusiers written word and his realised works vis--vis the dynamics of urban phenomena whereby the citizens have attained a new lifestyle.

Though enormous literature, mostly journalism spiced with glossy pictures, exists worldwide on the city, Dr. SS Bhatti shows for the first time how the creation of Chandigarh a state capital that outrivals national capitals of the modern world is, in fact, An Irony of History! The publications uniqueness springs from the authors amazing professional versatility, with insightful expertise in History of Modern Architecture as well as Indian Architecture, to put Chandigarh in the right global perspective.

Having lived in Chandigarh since 1961 and seen it grow from a daring experiment to an unforgettable experience the author brings to his doctorate a rare authenticity.

Discountenancing the hypothesis-based method, he has developed a holistic system of scholastic enquiry, PAR-SOM, for comprehensive investigation and critical evaluation of city that he regards to be a social organism and a work of art. Plan, Action and Reality, in combination with Subjective, Objective and Metaphysical dimensions, constitute his novel method.

As a rich resource for future research, the book is a definitive work, which should be compulsory reading for all those concerned with planning for vital communities in the 21st century.

Nicknamed Chandigarhs Mr. Versatility, he is a celebrated theorist, practitioner, researcher, and pedagogue in the disciplines noted above. He holds three PhDs in Architecture, Theology, and Sikh Architecture.

He has won over 20 awards, including the Indian Institute of Architect Life-Time Achievement Gold Medal for Architectural Education and its Journals National Award for Excellence in Architecture (Research Category) for doctorate on Chandigarh.

He developed new subjects like Architectural Journalism, Theory of Design, Art in Architecture, Design Development & Presentation Techniques. He is a widely-respected public speaker and commentator on psycho-social and cultural matters.

Dr. Bhatti pioneered original architectural research in the country with his work: Rock Garden in Chandigarh A Critical Evaluation of the Work of Nek Chand for which he received his Master of Architecture (M Arch) degree from The University of Queensland, Australia. He has made this work of Outsider Art known worldwide.

Chapter on Van-Urbanisation written by him appears in the International Association of Foresters book titled Man and Forests of which he also designed the cover-page. He has published over 700 articles on wide-ranging subjects, and authored a dozen books.

Retired as Principal, Chandigarh College of Architecture, established at Le Corbusiers behest as the academic wing of the Chandigarh Experiment, Dr. Bhatti lives in Chandigarh, where he is active writing books, pursuing research, giving discourses, and exploring, among other things, new realms of Creativity in architecture, engineering, and many other disciplines.