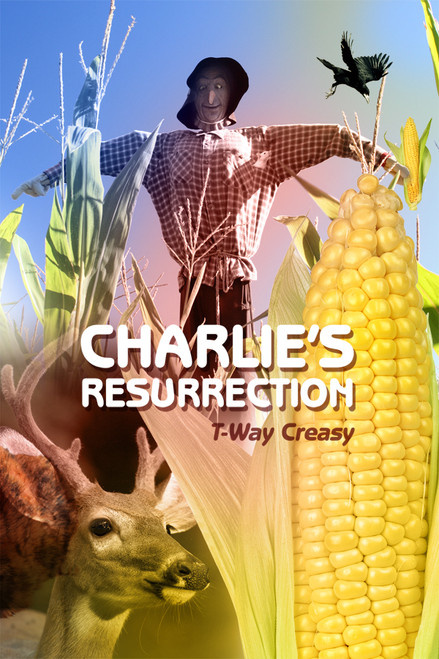 Imagine if you will, a talking scarecrow named Charlie with an intellectual mind and the ability to communicate to the animal world.

When Charlie on his cross is suddenly blown over by a powerful thunderstorm and he doesn’t have the “spine-bone strength to come to his own aid,” it takes his animal friends to come to his rescue. Surprisingly, a crow named Cornelius even takes part in the rescue. To make matters worse, however, a large clan of crows (in the thousands), including a crow-militia, are about to descend upon the cornfield. The story includes a cat named Randolf* who befriends two mice, an erratic brown rabbit named Bernice who gets into more trouble than she deserves, a fox who eats crow (in more ways than one), a nervous raccoon who has a speech problem, a crow who must defend his rights in the crow community and a scarecrow who dreams he is a human.

The story unfolds from dusk to dawn as prey versus predator versus predator, the evolution of unusual friendships, family ties becoming broken, tragedy and mishap ensue, all coming together for one spectacular event—Charlie’s Resurrection!

T-Way Creasy, a former truck driver, carpenter, scenic artist and appliance technician, is now a writer of fantasy and fiction. He lives in a humble dwelling outside of Douglasville, Georgia, where he enjoys watching and studying wildlife, their instinct behavior patterns and their playfulness. He was born and raised in a small town in Tennessee where, you could say, his imagination flourished. After receiving his PhD in English in 1984, he acquired the ability to write more fluently. He has always had the desire to be a professional writer, but opportunity did not present itself with his other pursuing careers. Now, at age sixty-five and retired, he is fulfilling his dream. Yet, he still takes time to dabble with his woodworking hobbies, and on occasion, do a little fishing.