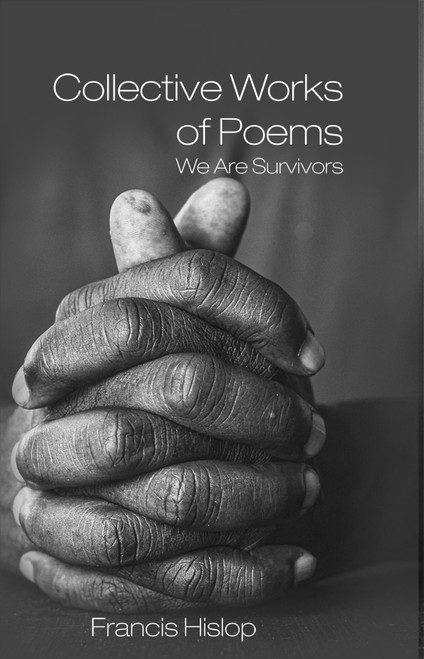 Collective Works of Poems: We are Survivors is Francis Hislop’s debut book, though he has been blending metaphor and simile for over 30 years. Hislop writes about everything he cares about and does so in an honest and bold style, centering his attention on the major force he feels makes life not only possible, but also worth living: love. He delves into the wonderful moments that life brings us, from vacations with horses, to steel pan music, and having kids. He does so in a reverent and awe-inspiring voice that allows the reader to really take hold of these events and experience them through his eyes. History and culture are not left out as the book offers a clear and thought-provoking voice on war, poverty, and immigration.

There are poems about worship as well and they address Hislop’s love for God and his faith. Hislop also writes about President Barack Obama. Also included in the work is a poem by Hislop’s children, Maya and Rasheed, as homage to the author himself from a Father’s Day gone by.

Hislop hopes that readers will have no doubt when they peruse the lines that he is a well-equipped talent with a story to tell and a lesson to be learned from his life and times. Hislop hopes readers enjoy his poems and share them with family, friends, and neighbors so they can share in this exciting journey. Take a read of these Collective Works of Poems: We are Survivors and share his thoughts and ideas.

Francis Hislop was born in Belmont, Port of Spain, Trinidad in the West Indies. He migrated to New York, USA, at the age of 16 to join his mom, two brothers, and his sister in 1975. He attended Wingate High School in Brooklyn and City College in Harlem. He also attended COSTAATT (College of Science, Technology, and Applied Arts of Trinidad and Tobago) where he earned his degree in Journalism, Public Relations, and Mass Communications.

Hislop’s love of writing has permeated his whole adult life. He wrote for his high school newspaper, a community newspaper, and finally for himself and the world. Writing with a conscience is his modus operandi. Hislop likes to be a prolific writer and prefers poetry over prose and novels.

Poems from a Poet - eBook

A Poem In Time; A Story Behind - eBook

Strubel and the Village of Strawberry - eBook