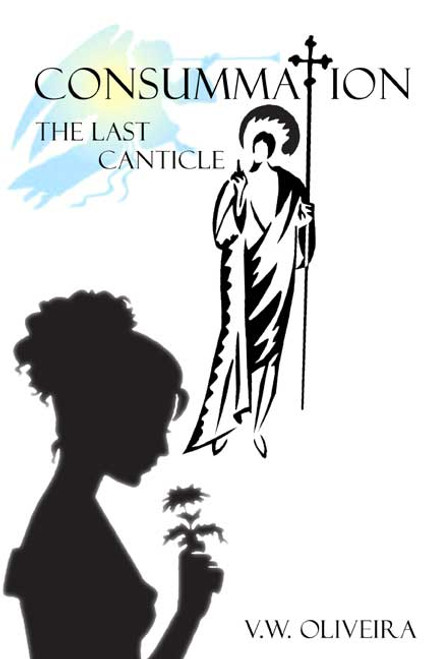 by V. W. Oliveira It all begins shortly after the Atomic War that occurred about twelve years before all the continents formed one single landmass during great upheavals of the Earth. In this era all technology was demolished or melted, while its architects were all killed in the war or by deadly gases from the Earth itself. The survivors, including Tetrascyld and his betrothed Cleothera, lived in caverns or underground hovels only to emerge to a world devastated by both nature and man. They began to rebuild the ruins of some of their cities and surrounded them with stone walls, for evil still brooded in the appearance of the red armies and shadow legions of Demoteles, the last Tyrant who caused the Atomic War. It is at this juncture that we find Tetrascyld and Cleothera, when the first angels of God are sent to prepare the rapture. All those that would not heed would have to make a journey to reach the summit of holy Anthedon where the gates of Heaven rest through the fields of the enemies of Heaven. Cleothera is taken in the rapture, but Tetrascyld, caught in the settled glamour of the world, is left to escape the town after a sign. His betrothed implores for him at the throne of God, who sends an angel called Aresthanas to help him through exchanges of letters while Tetras struggles through many battles. After countless adventures Tetras finds himself at the end of time as the fires of the Consummation fall from the skies. A truce has been called between three main armies to determine the victory in a final duel in the ancient Aefen forum. The last duel between three rivals under a strange sky will lead to the final grace of God or to total oblivion for all. ABOUT THE AUTHOR V. W. Oliveira was born in Woodstock, Ontario , Canada. He has an N.I.A certificate in Basic Journalism and Fiction Writing. He devotes his time to reading religious articles, history, science and ancient writings of the world. His favourite authors include Dante Alighieri, J. R. R. Tolkien and C. S. Lewis as well as the gifted Aristotle. He enjoys stories of the ancient world of the Greeks and Romans, which bears a meaning to his storyline of the Consummation, as can be seen in most of his character names. His hobbies include writing poems and stories and collecting local fossils and books of all sorts. He also likes documentaries from the Wild West to creeping crawling creatures to observe and learn, but not as much as Catholic studies on God and the angels. He, at one time, wished to be a veteranarian, archaeologist, or even a Priest, but through his journey through other pursuits he has met people he would have never had but through the grace of God, especially the schoolchildren throughout his recent tenure. (2006, paperback, 326 pages) Availability: Usually ships in 2-3 business days.
×

Cornelius and the Undigested Kernel of Corn

Come Listen to My Heart/ He Will Meet Us There

Conversations Between Me and I: The Forgotten Art of Self Therapy

Color Rhythms of the Universe