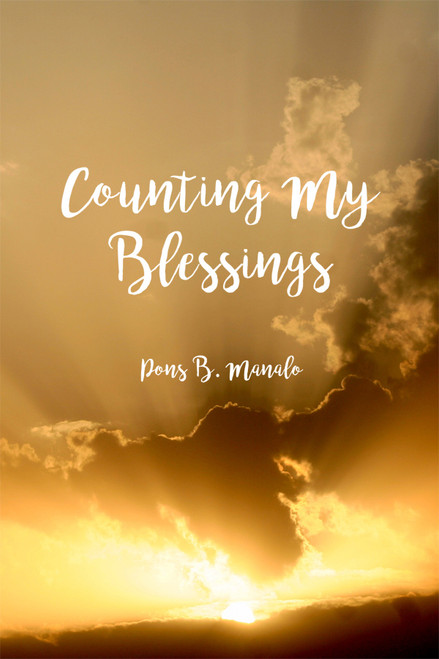 Counting My Blessings
by Pons B. Manalo

When Pons B. Manalo was attending a retreat or any session, everyone was always asking for him to share his life. On these occasions, oftentimes attendees and other relatives of Helen were pushing him to write a book about himself. He had no intention of summarizing his life story, however an Arabian student who was boarding in his house pushed him hard, saying that many people will benefit from it.

Manalo then realized that maybe people with the same predicament may learn something about confronting challenges in life. They must have strong dedication and faith in themselves compounded with infinite trust in God. With these arms within him, there is no thorny road that he cannot walk over. The success of his life is within his reach if he only digs deep into his capabilities without stopping until the light of the tunnel is beaming upon him. Whatever endeavor he wants to achieve, he must be sedulously determined in every effort to reach the goal. Laziness is a ticket to the deleteriousness of his ambition. God helps those who help themselves.

At an early age, Pons B. Manalo had experienced insurmountable hardship in life and his livelihood. He was always wondering if his family would have food on their table. Every now and then he had to gather firewood, both dried and newly cut wood, on the hill of Sta. Maria with an empty stomach just to alleviate the burden of his parents. He even went deep sea fishing with his father and co-fishermen. At his young age, he had made up his mind that he would not follow the footsteps of his father, who fished all his life. He developed a plan for how he could improve his way of life by having an education and obtaining a college degree. This was what he contemplated: he will work with a wealthy family for his education in payment of his services as a domestic helper. And if he didnt find any willing people to pay his tuition, he would just work for a year and in the following year he would attend school and so on.

As time went by, Manalo became very religious by praying alone at home and by going to church on Sundays. His fervent prayers were answered when one of the high schools in his hometown offered a scholarship test for the first time on the year of his graduation in the elementary. Luckily, he passed that given examination which served as the ladder to reach the status he has now.