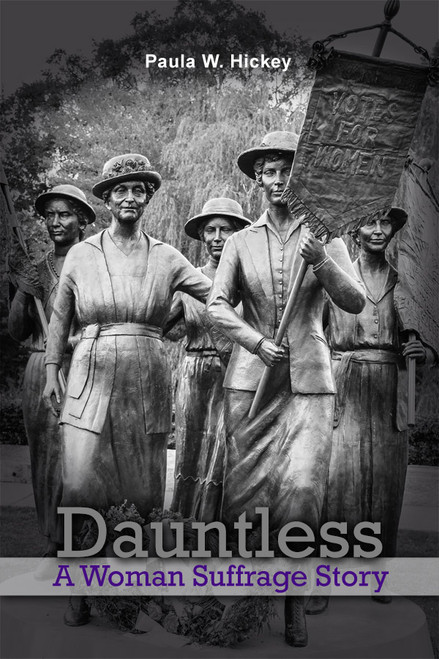 The summer of 1920 in the United States: women cannot vote. Congress passed the 19th Amendment to the Constitution and, while thirty-five states have ratified the amendment, one more state has to ratify for woman’s suffrage to be law. Tennessee’s governor agrees to call the Legislature into special session and the War of the Roses begins: yellow roses for the Suffragists; red for the Antis. For twelve hellishly hot days in August 1920, both camps headquarter at the Hermitage Hotel in the shadow of the State Capitol. Meanwhile, besieged by powerful lobbyists and political players, a group of dauntless Suffragists refuse to be intimidated as bribes, favors and whiskey flow freely.

In Dauntless: A Woman Suffrage Story, four fearless women fill the pages with the story within the story, which is theirs, after all.

Intrigued by accounts of the selfless women who made Tennessee the thirty-sixth state to ratify the 19th amendment, author Paula W. Hickey chose four of them to narrate her novel Dauntless: A Woman Suffrage Story about that not-so-long ago summer in 1920.

They were women whose courage and sacrifice against overwhelming odds gave future generations of women the vote and, consequently, other social justice reforms benefitting women and children. Bringing them to life was as important as the suffrage story, and Paula hopes the readers will be fascinated by them as well.

Before retiring, Paula enjoyed a teaching career. She has three adult daughters and one granddaughter. She lives in Knoxville, Tennessee, with her husband, Mack, and two dogs.

Death Is but a Doorway - eBook