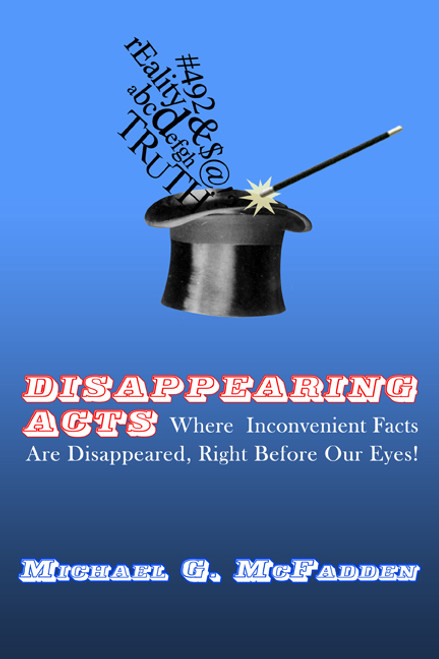 by Michael G. McFadden Disappearing Acts is about how facts are disappeared, distorted, or ignored in order that we might arrive at some politically/socially popular but ultimately destructive conclusion. Disappearing Acts examines our current culture from a historical and common sense perspective and offers solutions for many problems previously thought to be intractable. From the reverence we reserve for our Founding Fathers to the estimable praise we lavish on the World War II generation (The Greatest American Generation), Disappearing Acts critically examines most of what is accepted as conventional wisdom in America and offers an alternate perspective. The book, in part, is an attempt to get America past the brain-dead sloganeering that currently defines our public discourse (they hate us for our freedom) and seeks a higher level of fact-based (intellectual) cultural analysis. Considering where we, as Americans, are at this place in our history and the direction we are likely headed absent a sobering cultural analysis, this is one of the most important books written in quite some time. ABOUT THE AUTHOR The author is an attorney with previous experience writing for the Baltimore City Council, the Baltimore Sun, the Baltimore Times, and the Baltimore Afro-American (newspapers). He is a lifelong native of Baltimore, Maryland; he has appeared on local access cable tv; and he has been an in-studio guest on several local talk-radio programs. He has worked on Capital Hill with local government and grassroots organizations on issues of local and national import. Michael G. McFadden is the youngest son of Garris and Barbara McFadden, and he is Marc and Ritas baby brother. (2008, paperback, 256 pages) Availability: Usually ships in 2-3 business days.
×