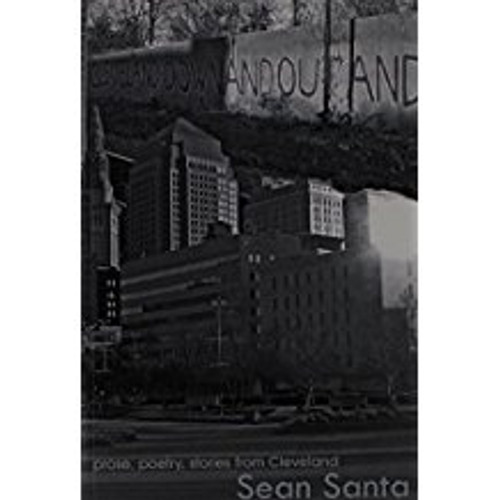 by Sean Santa Just as Del Close said to the theater, Sean Santa says to Cleveland, Yes, and. The citys graffiti artists write, Down and Out and, and Sean Santa answers them. It is down and out and spiritual, experimental, lonely, romantic, and a child of the brilliant Monster that is America. Using Cleveland as his scene partner, he raps back and forth with the city; together they reveal buzzing back alleys, Lake Erie lightning, Little Italy wine bottles, and unfinished cigarettes between lovers. Down and Out and celebrates the exploration of the city of Cleveland, offering readers a shotgun ride into its counterculture. ABOUT THE AUTHOR Sean Santa is currently finishing up his English and Political Science undergraduate degrees at Case Western Reserve University in Cleveland, Ohio. In addition to poetry and fiction, he also writes, directs, and produces plays with his brother Ryan. His future plans include obtaining an M.F.A degree, finishing a movie script, and making Cleveland famous. More of his work can be read at seansanta.blogspot.com. "Cleveland didn't realize it needed a lyrical and outrageous manifesto, but Sean Santa has written one in the poems and rants and stories in this book. You need to know the answer to "Cleveland, do you snow?" You need to know the "Rules for Post Lake Erie Beats." You need to know "How the Light Hits." You need to know." Mary Grimm, author of Left to Themselves "Cleveland is a beast in a foul mood wearing makeup and a hubcap diamond-star halo -- and its streets are aflame with twisted con-men and bearded buskers, velvet barflys and two-fisted blue-collar working class poets. Sean Santa is a writer in the true Cleveland underground tradition. His poems and stories rise from the red bricks in ethereal radioactive vapor and dare you to fight back. Read this book. You already know the people you'll meet here. And the city that surrounds them is either your best friend or worst enemy, but either way, it's dead ahead and there's nowhere left to run." Mark S. Kuhar, Editor, Deep Cleveland Press (2006, paperback, 96 pages) Availability: Usually ships in 2-3 business days.

Out of the Ashes: Inspirational Book of Poetry