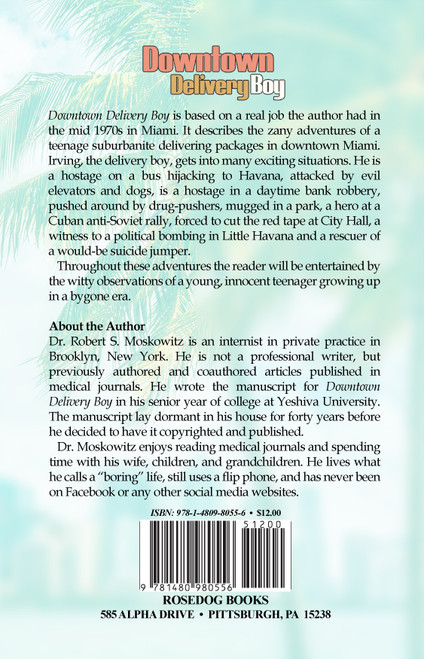 Downtown Delivery Boy is based on a real job the author had in the mid 1970s in Miami. It describes the zany adventures of a teenage suburbanite delivering packages in downtown Miami. Irving, the delivery boy, gets into many exciting situations. He is a hostage on a bus hijacking to Havana, attacked by evil elevators and dogs, is a hostage in a daytime bank robbery, pushed around by drug-pushers, mugged in a park, a hero at a Cuban anti-Soviet rally, forced to cut the red tape at City Hall, a witness to a political bombing in Little Havana and a rescuer of a would-be suicide jumper.

Throughout these adventures the reader will be entertained by the witty observations of a young, innocent teenager growing up in a bygone era.

Dr. Robert S. Moskowitz is an internist in private practice in Brooklyn, New York. He is not a professional writer, but previously authored and coauthored articles published in medical journals. He wrote the manuscript for Downtown Delivery Boy in his senior year of college at Yeshiva University. The manuscript lay dormant in his house for forty years before he decided to have it copyrighted and published.

Dr. Moskowitz enjoys reading medical journals and spending time with his wife, children, and grandchildren. He lives what he calls a “boring” life, still uses a flip phone, and has never been on Facebook or any other social media websites.

The Boy from Hyden, KY - eBook