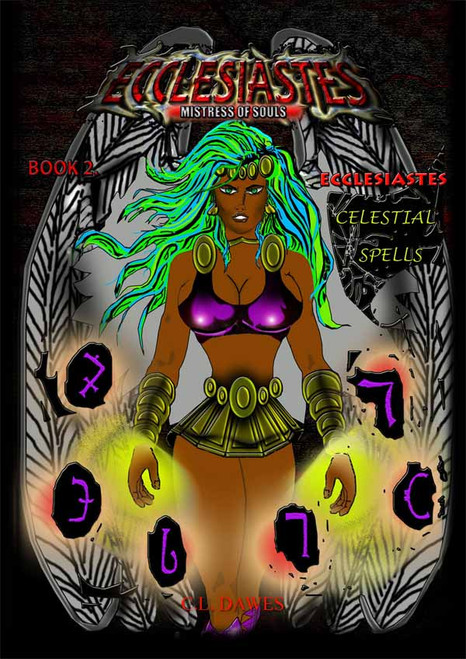 C.L. Dawes, the second oldest of four boys, grew up in a very abusive atmosphere. As a little boy he and his mother, a former singer with K.C. and the Sunshine, encountered a series of mentally and emotionally difficult times. C.L. Dawes watched his mom continuously being physically and mentally abused by his father. Always looked for an outlet to be able to cope and deal with his environment, he recognized his skill in art and his love for drawing. He began to create a world of his own. After watching a series of superhero cartoons and television shows, he watched as his mom was preparing his clothes for the next day after being physically abused. To him it was amazing for her to still be able to be a mom and have the strength to be able to go on with business as usual. His mom refused to throw in the towel and still was a good homemaker. C.L. Dawes watching his mother continue to be strong and still beautiful was the key moment in which he created Ecclesiastes. The character is a representation of his mothers strength, beauty, and tenacity and some of her adventures. Ecclesiastes is very much inspired by and based on C.L. Dawes mother.

The name Ecclesiastes is inspired by C.L. Dawes childhood of religious and biblical influences. It means to address an assembly (ecclesia), Just as Ecclesiastes address the issues of mankind, it also means that there is a season and time for everything. At this time C.L. Dawes and his mom, alongside his brothers, reside in Southern California. C.L. Dawes is a fitness buff and sports model. He also has successfully completed his studies as a animator and graphic artist at The Art Institute. He has started to tamper in the world of entertainment as an actor in a few sci-fi films and a featured scenes on soaps. He can also be seen in publications such as Fever Magazine, Majesty Magazine, and Playgirl Magazine. His mother is now returning to music again and also desiging as well. C.L. Dawes has a way of using his characters and adventures as metaphors to the perils and trials of the situations that encompass and plague many people of today, especially single mothers.

Edilma: On White and On Black