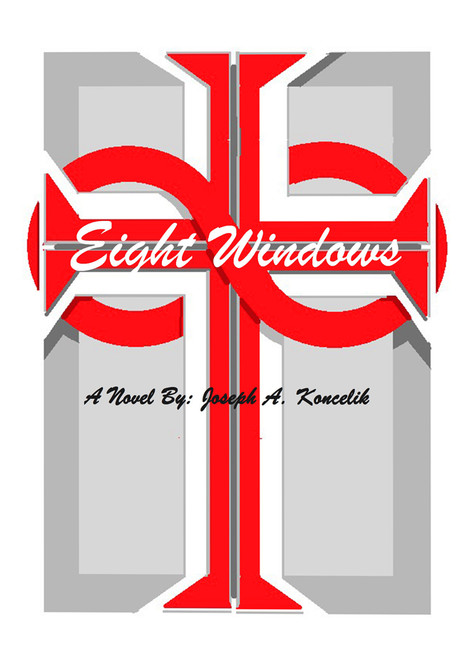 Eight Windows
by Joseph A. Koncelik

Eight Windows is a fictional story spanning 100 years. The author grew up on the south shore of Long Island and has roots in the Czech community, the Episcopal Church and the life on Great South Bay from which this story is drawn. At one time, this place was the location of numerous estates built by New York Citys blue bloods including private churches that reflected their wealth and life style. The tale begins with the creation of eight Tiffany windows for a church built on an estate in 1912 overlooking Great South Bay in the Town of Oakdale. This fictional estate is called Kairos by a turn-of-the-century Wall Street tycoon, Cedric Vandercamp. The story flexes from the present day to flashbacks in time during the creation of the windows by a talented young priest, Julius Cherveny, and the wife of Vandercamp, Eleanor Bouffort Vandercamp, but removed from the church and hidden by Eleanors abusive and jealous husband. Those precious and priceless windows are rediscovered in 2012 and stolen in an elaborate plot by a murdering thief named Karl Banecek, an accomplice, Emil Joaquim Darktow, and his cohorts called Saligia. A mysterious priest with secret connections to the crime enlists the aid of a female private detective, one Daisy Patience Fleabane Reidlos. She is charged with uncovering the plot, catching the murderer of a church sexton who protected the windows and retrieving them. Greed is the common theme spanning the 20th century; one of the seven deadly sins. Those sins are represented by members of Saligia. They are opposed with righteous force by the presence of a church vestry made up of seven heavenly virtues. Woven into the story is the ill-fated love affair of two star-crossed lovers who design the windows; the resurgence of the Kairos estate, first as a destination wedding location by the nefarious antagonists, and eventually as a mission-based rehabilitation center when the estate is recovered for the Episcopal Church. That weaving of this story also includes an unusual connection between a clever private detective and a powerful Mafioso don. The reader will find authenticity in the story through its connection to a time, place and the personalities of people who contribute to the broad diversity of Long Island. The author has provided illustrations of the windows as well as more than 20 other drawings to illuminate the tale.

Happiness Is Having Eight Babes