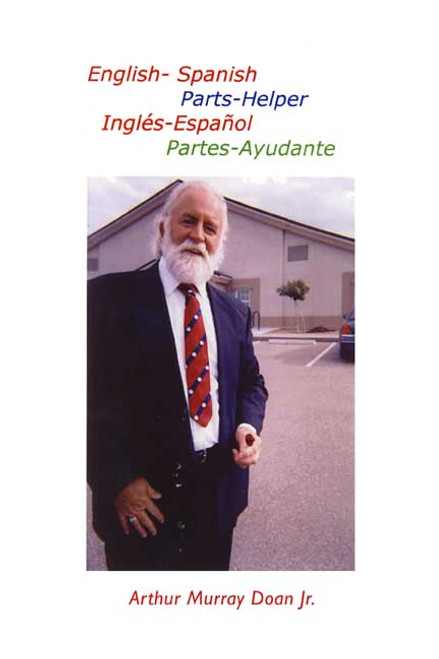 by Arthur Murray Doan Jr. This book is intended to help the English-speaking person in any Latin country communicate in order to fix a car, buy gas, or ask for help on the side of the road. You may also learn how to obtain a tow truck or figure money owed so that your voyage is SAFE. This book commenced when I was looking for Spanish gospel words. Este libro es deseado a ayundar a uno que habla espaol que esta en un pais que hablan Ingls. Poder arregular su carro, comprar gasolina y pedir ayda si se le discompone su carro. Usted puede obtener una gra, figurar costo y cambio, para que su viaje sea SEGURO. Este libro comienzo quando estaba de bsqueda de palabras Espaoles del evangelio. ABOUT THE AUTHOR I was born in Nogales, Arizona, and I was raised by Anita and Jack Drum in Magdalena Sonora. At six, I was taken to Nogales, where I started first grade. The principal called my father and asked him if he knew I could not speak English. My father came to the school immediately. When he arrived, he walked into the office and asked me what I was up to. The principal asked if he noticed that he did not speak English to me. My father said, As a matter of fact, I have never spoken in English to my son. The principal advised that I attend school in Mexico, but my father insisted that I attend in Arizona. My second year of first grade was with a woman and her two Navaho foster children. I was seven; they were eight and nine years old. First, I learned to defend myself, and a great need came over meto learn English. The end of that year came, and Mrs. McDonald went to get my graduation diploma. I went to the closet one more time; I called the older boy after I had made a wall with paper boxes. When the younger boy broke through the boxes, I got through with him. I then walked out to see Mrs. McDonald. She looked at me, smiled, then said, They deserved that. She handed me my diploma and said, You may go if you like. I ran like the wind and never looked back until I reached my driveway. Whew! They did not follow me! (2006, paperback, 70 pages) Availability: Usually ships in 2-3 business days.
×

Ending the Shame: Transforming Public Education So It Works for All Students

Emancipation, Revolution and Oppression: A True Story of Perseverance and Hope