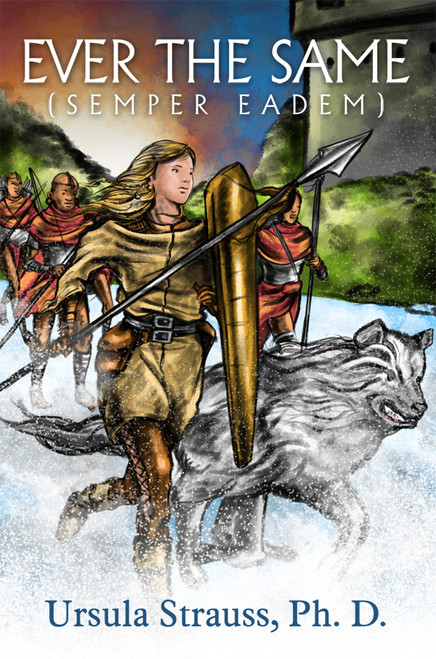 Ever the Same: (Semper Eadem)
by Ursula Strauss, Ph. D.

A National Geographic photo of a victim of Mount Vesuviuss 79 A.D. eruption emerges. Her blond hair intact and the remains of a fetus within her skeletonized body suggested the womans northern origin and probable slave status. Emperor Augustus had closed the Empires borders a century before, inadvertently creating a shortage of free labor. Foreign females of childbearing age were now being kidnapped to brood slave babies for the booming economy. Ever the Same explores the history of that period, the immutable foibles of human nature and especially, the exploitation of females, freeborn or slave, whose roles were systematically restricted to pleasuring men and producing offspring. Ursa, a fair-haired warrior-princess whose Teutonic tribe has been enslaved, is escorted to Rome by Antonius, a young cavalry officer. They fall in love en route, but she is forced to wed a lecherous, middle-aged senator from Pompeii who requires a male heir. Now living in the shadow of treacherous Mount Vesuvius, the contrast between denigrating Roman attitudes toward females and those of her respectful Teutonic tribe drives her to desperation. When she finds herself pregnant with Antoniuss child, she and her maid servant hatch a daring plan to shield it from the vengeance of her still unsuspecting husband.

Ursula Strauss is a practicing psychotherapist and motivational speaker. She has taught psychology at several higher institutions and lectured as far away as Kyoto, Japan, and Taipei, Taiwan. Her innovative Mobile Psychological Services won international acclaim and was featured on The Today Show. An actress by avocation, she has played in and directed many productions in New Yorks community theater. Dr. Strausss psychological expertise and considerable thespian experience have combined to create the realistically-flawed characters and animated dialogue of Ever the Same, whose intriguing plot is set in the authors favorite historical period, Imperial Rome of the First Century AD.

All Women Are Not the Same

Exercising Between the Sheets - eBook

Even Hand: Long Live the Republic