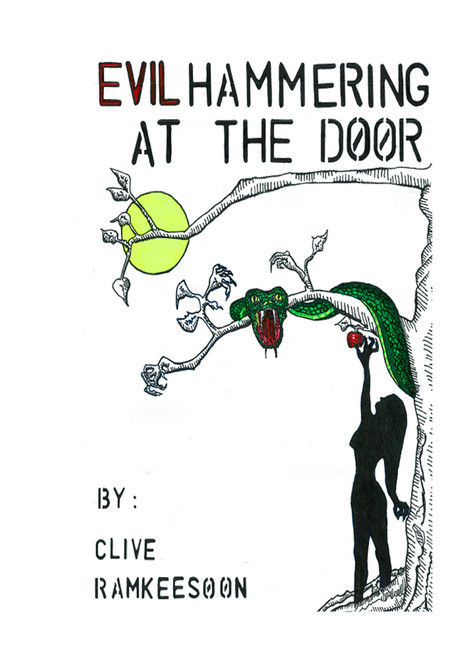 Evil Hammering at the Door
by Clive N. Ramkeesoon

Tragedy strikes a Korean family when their missing daughter, Serena, is found comatose in a hospital. After a long convalescence, she is only partially healed when Stephen, a Canadian, arrives to spend his long vacation in her home. They fall in love and get married, but immigration regulations force them apart. Stephen must return to Canada immediately; Serena to her Korean farm.

Against flashes of Korean and Canadian landscape and scenes of life in both those countries some extraordinary events occur. They include adultery, suicide, gang-rape, incest, murder, blindness, prophecy and cataclysm.

Themes of love, betrayal, forgiveness, shame and isolation are seamlessly woven into the tapestry of evil. The dark episodes hang over the events of the story that is relieved only by Serenas happy childhood, her karate training, her home-pigeon racing, her humanitarian projects, her artistry as a painter, the medical milestones of her recovery from PTSD and her numerous forays into the Christocentric heart of nature. A few examples of literary analysis make for interesting reading.

With a Bachelor of Arts (UK), Clive N. Ramkeesoon began teaching French at Hillview College from 1948 to 1949, then transferred to Queens Royal College from 1949 through 1954 in Trinidad. He then went to Dalhousie University in Nova Scotia, Canada to complete his Masters degree and later to the University of Western Ontario to do his PhD. He then lectured at Royal Roads Military College training graduates to become officers in the Navy, Army and Air Force of Canadas Armed Forces. He retired as an Associate Professor in 1995.