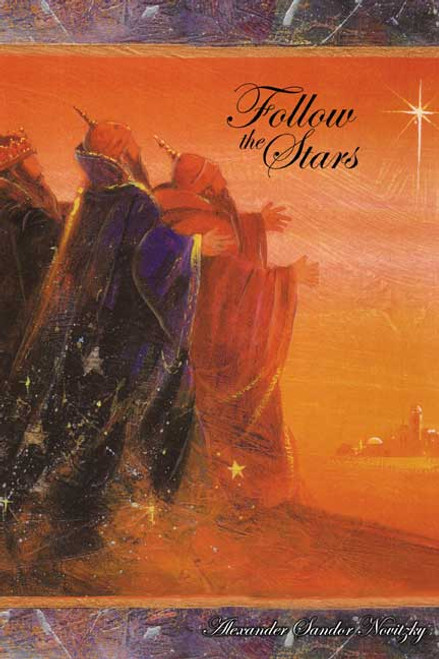 by Alexander Sandor Novitzky Follow the Stars is the continuation of Alexander Novitzkys first book Prince Sandor, published in 2004. The story begins at St. Joseph Catholic Church where the author began his schooling in the first grade at age six and studied the Catholic Bible for four years. At the age of ten, he moved to the suburb of Ferndale, where he started in the public school system of Hazel Park. Sandor was born in Detriot, Michigan, and he lived there until he retired in 1980 and moved to Bradenton, Florida to join Dorothy Schwartz. Sandor was a writer who became interested in writing about all his immigrant family, who came to America in 1907. During his younger years, Sandor wrote for the Solidarity newspaper as a member of the UAW-CIO union. Later, when he was in the U.S. Navy, he was a reporter for the Seabag, the newspaper of the Naval Operating Base at Norfolk. When he retired, Sandor wrote many articles as a freelance writer for the Bradenton Herald and the Sarasota Herald-Tribune. Sandor began writing seriously until he finished his first novel and suffered a stroke in 1989. Five years later, he became well with Gods help to get published. After the success of Prince Sandor, many asked if he would write again. Follow the Stars recounts his lifetime of religious experience. Sandor has not always been a religious person who would attend church regularly on Sunday. His belief lies in a God who is a super power that created the Universe, including the earth, other planets, and the sun. He believes there is an explanation to this world, but we will never really see God until death. Then we will know the final answer. ABOUT THE AUTHOR A native of Detriot, Michigan, Alexander Novitzky, known as Sandor, worked as a machine designer at Tishken Products in Oak Park. After taking an early retirement in 1980, Sandor joined his wife Dorothy in her apartment in Bradenton, Florida. Not being satisfied with his first two autobiographies, Sandor has begun work on two more manuscripts: Horses are Faster, which will recount his experiences and methods used in them, and Flying to Hungary, which will describe his love of his parents country Hungary. Sandor hopes that many readers will read all four of his books to gain a complete perspective on his life and its significance. (2006, paperback, 122 pages) Availability: Usually ships in 2-3 business days.
×

Followship: The Road to Real Discipleship

Flashlight Frights: Fireside Tales to Tell in the Night