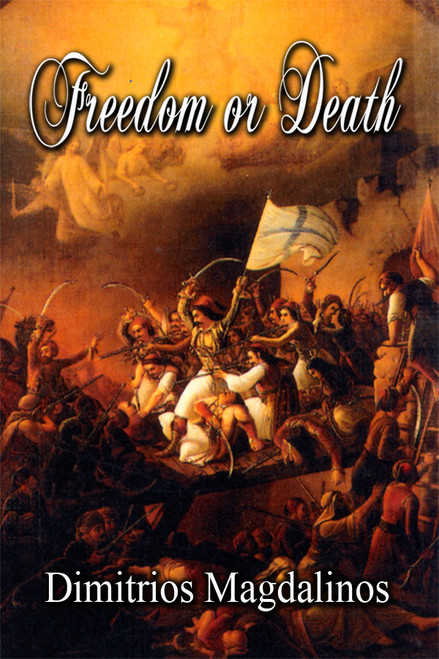 Freedom or Death
by Dimitrios Magdalinos

In April 1821, the sultan, Ali Passas, attempts to transport all of Greeces money to Konstantinoupolis (now Istanbul). Dimitrios Makris, under the wishes of Mesologis Anastasios Palamas, raids the transporters in the Black Eye Mountain and kills all but one of them, left to send a message to Ali Passas: the new generation will fight to the death.

After killing five hundred Turks, including Moustafa Beis, son of Ali. Passas, the Mesologians celebrate the warriors of Mesologi. Peloponissos is proud of them, while Ali Passas is infuriated by the death of his son. He sends Omer Bryonis, with twelve thousand soldiers, in January 1822. Omer Bryonis and his men meet the heroic Meslogians on their own turf for a clash of the powers, led by two hundred horsemen.

Born in Mesologgi, Greece, Dimitrios Magdalinos was an excellent student. His dream was to become a teacher or enter into the military to serve and protect. Unfortunately, his father became ill, and Dimitrios became the provider for his family, foregoing his dreams in favor of a life serving others.

From a Dirt Floor Garage in Ireland to an American Retirement

From Deficit to Surplus: The Path to Solvency for the USA