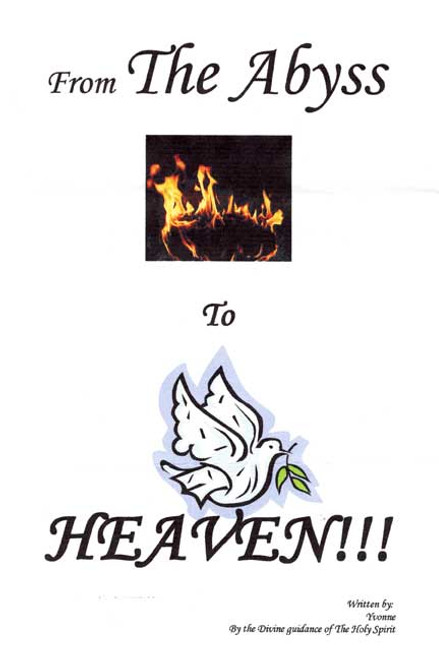 by Yvonne by the Divine Guidance of the Holy Spirit At twelve she asked her mother if she loved her, and she received a response of no. She later became pregnant by who she thought was Mr. Right, but he soon left and she had to give up her child. She believed all of her nightmares were over when she met her future husband, but the hellish escapades began again when she found out he had bought her as a sex slave from her very own mother. Although no human being would be expected to survive any of these travails, Yvonne overcame her demons as she sought the Lord for answers and help. From the Abyss to Heaven mainly focuses on Yvonnes relationship with her husband a selfish, sex-obsessed man who tortured her not only behind closed doors, but he also shared her sexually with his friends. After years of physical, sexual, and mental abuse, Yvonne finally seeks and receives help from a beloved pastor, who shows her the light of the Lord and helps her escape the pit of hell in which she had lived for so long. ABOUT THE AUTHOR A servant of the Lord, Yvonne has published this autobiography, From the Abyss to Heaven, as a means for others who might be in a similar situation to find hope and trust that God will help them. (2008, paperback, 84 pages) Availability: Usually ships in 2-3 business days.
×

From Raindrops to Rainbows

From the Back of the Hearse: A Compilation of True Short Stories

From IP to IPO

From the Heart by Theresa Naylor

From the Shore into Darkness