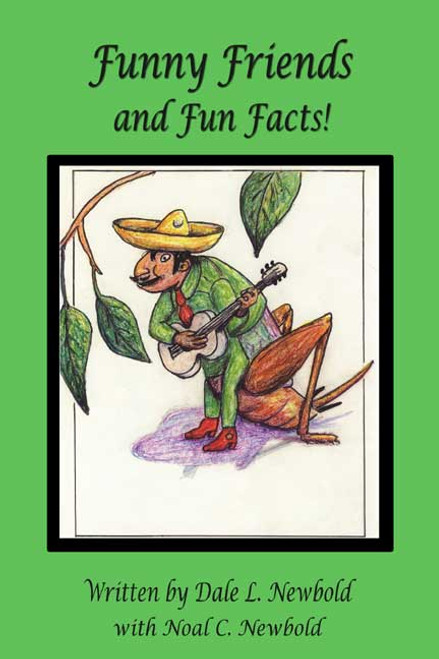 by Dale L. Newbold and Noal C. Newbold Funny Friends was written to appeal to all ages. Clever and colorful illustrations of insects and animals will spark your imagination as they leap from the pages! The poems are simple, yet cleverly written, to charm and interest both young and mature readers. "Fun Facts" are included to give unique insight and scientific information about the intriguing behaviors and instincts of each creature and to educate the curious reader. This little treasure book will bring years of enjoyment to your entire family as you turn each page together and enjoy the poetic and artistic collection again and again! ABOUT THE AUTHORS Dale L. Newbold is the father of eight wonderful children. Along with the dedication of their mother, he has raised them to become good citizens of our wonderful country. Dale was born in a small town, Heber City, Utah and raised on a farm. From age 6-12 years, he was responsible for all the jobs of running a farm while going to school and helping janitor a school building with his father, who also worked at the silver mines in Park City, Utah. He learned the need and value of hard work, dependability and firm discipline. He worked two jobs after high school, saved money, got married at 19 years of age. Then he went to college and worked at Wonder Bakery for eight and a half years while going through school. Dale graduated from the University of Utah with a B.S. in Invertebrate Zoology. He earned his Master's Degree in Biology on a scholarship to the University of Oregon. He has had an interest in animals his entire life and has the background that led to the creation of "Funny Friends." Dale has been a teacher for most of his life. He has taught junior high, high school and a college lab class. He understands and appreciates a good education and believes this book serves that purpose, as well as entertains! Noal C. Newbold is Dale's younger brother. He was a talented writer of poetry, stories, and has written and published several of his works. He has received national acclaim for his short stories and has been a ghost writer for a book of a well-known religious leader that has worldwide circulation. He also co-authored a book of the history of Park City, Utah called, Silver and Snow. Noal initiated the work of "Funny Friends" with ten clever poems about various animals. He asked Dale to illustrate them. Letters between Noal in Utah and Dale in California, finally resulted in characters that were agreeable to the approval of Noal's high standards of excellence. After forty years from 1965 to 2005, their efforts have finally come to fruition. Noal became terminally ill. Due to his untimely death, he will not see his efforts come to fruition. This book is dedicated to his fond and deserving memory. (2006, paperback, 40 pages) Availability: Usually ships in 2-3 business days.
×