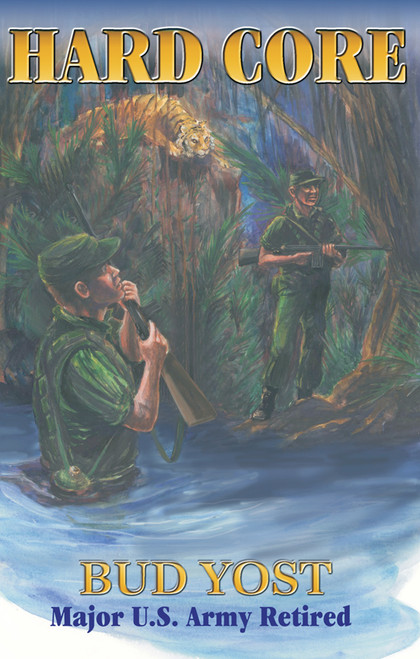 by Bud Yost, Major U.S. Army (Retired) Death always stalked close to the Hard Core squad in the jungles of Vietnam, but now they faced another threat. These paratroopers of C Company of the 502nd Airborne Infantry had already endured relentless, fierce close combat with Viet Cong and the North Vietnamese Army, oftentimes facing overwhelming odds. Besides fighting a formidable enemy, they also had to battle the harsh elements of the jungle: excessive heat; insects; snakes and leeches; jungle foliage and thorns ripping into their skin, causing festering infections; jungle rot; constant dysentery; malaria; and other maladies; months of being soaked from monsoon rains and filth and bone-wearying fatigue. On March 5, 1967, near Song Mau, the squad was on a reconnaissance patrol when they encountered a new and unexpected enemy, a large Bengal tiger. The tiger was stalking and about to pounce on the point man, PFC Wendell Rose, when SSG Bud Yost and SP4 Jim Buppert killed it. This encounter was just another saga added to the exploits of the Hard Core squad. From the jump towers at Fort Benning, Georgia, and rigorous training at stateside Army posts to combat in Vietnam, this is the poignant story of a group of tough, battle-hardened soldiers and their twenty-two-year-old squad leader as told by one who experienced the hardships and witnessed their extraordinary feats of bravery and survival. Unlike so many other chronicles about the early years of the Vietnam conflict, this story contains many little-known facts. Much of the equipment, training, tactics, leadership, and even the rations during the initial years of the conflict were from World War II. Living off the land; eating snakes, water buffalo, and captured Vietnamese rice; and remaining in the jungle for months without relief was the norm. This is must-read book for military history buffs or anyone interested in an authentic account of the travails of paratroopers during the early years of the Vietnam War. ABOUT THE AUTHOR Bud Yost resides on Amelia Island, Florida, with his wife, Kay. His military career, which began when he was sixteen years old, spanned two decades. During these twenty years, he served as a paratrooper and ranger, being promoted from Private to Major, and is the recipient of a Battlefield Commission, the Distinguished Service Cross (our nations second-highest award for valor), among a number of other valorous awards. Since retiring from the Army in 1981, he has been a merchant mariner. For the past twenty-five years, Bud has traversed the worlds oceans on a variety of vessels: oil tankers, container ships, tugs and tows, research ships, and small boats. Additionally he is a past president of the Exxon Seamens Union and served as a representative for the Sailors Union of the Pacific. When not at sea aboard ships, both he and Kay enjoy sailing on their forty-one-foot ketch, the Seafarer. Bud feels blessed he has lived such an adventuresome life and for his many friends at virtually every point on the globe. (2007, paperback, 122 pages) Availability: Usually ships in 2-3 business days.
×

Happy Balloon to You

He Watches Over Me: A Memoir