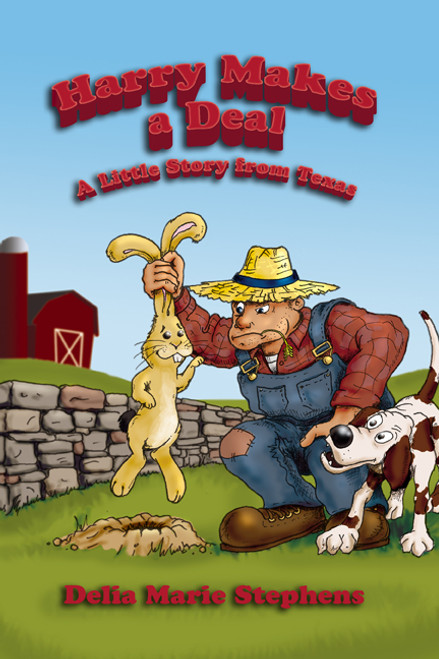 by Delia Marie Stephens Harry is a Central Texas jackrabbit who gets captured by a cotton farmer. He wins a blue ribbon at the fair and observes Texans from his cage: They wear belts with names on the back, drink Big Reds, play forty-two, and dance the two step. Harry, being Texas bred, doesnt give up trying to get his freedom back. This is a Pre-K story, one of the Little Stories from Texas series, written in rhyme by a native Texas grandmother who spent much of her childhood on a Central Texas farm, where jackrabbits, oak trees, cedar thickets, and limestone fences were part of the daily scene. ABOUT THE AUTHOR Delia is a native Texan. She was born in Central Texas and lived there until she was fourteen, when Fort Hood expanded and the government bought the familys farm. They moved to the Texas Panhandle, where Delia graduated from Childress High. She promptly returned to Central Texas and, in 1961, received her B.A. from the University of Mary Hardin-Baylor in Belton. After graduation she taught English in South Texas in the Live Oak County, San Antonio, and Corpus Christi areas. She later wrote for Fig Leaf Publishing Company in the Houston area. Delia received a law degree from Thurgood Marshall School of Law in 1981 and has practiced law ever since. Her office is near the Johnson Space Center in Houston. Her husband is Bill Stephens, a minister at Taylor Lake Christian Church. Bill and Delias grandchildren are Midwesterners. She writes little stories from Texas so their grandchildren will know their Texas roots. (2008, paperback, 32 pages) Availability: Usually ships in 2-3 business days.
×

Happy Today and Sad Tomorrow (Life Like a Roller Coaster)

Happiness Is Having Eight Babes