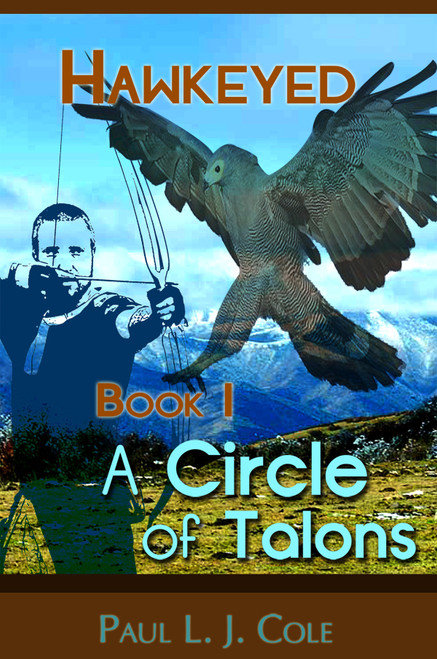 Hawkeyed Book I: A Circle of Talons
by Paul Cole

While tending his father's sheep, Danyel Shepherd comes across an Icehawk attack on Prince Pyter. The Icehawk is a vicious tool used by the Hawkmaster of the North, Talonn Falconner, to kill the heir apparent to the kingdom of Zandlia. During the fight with the Icehawk the bird buries its five talons in Dany's flesh. Since the `Circle of Talons' attack can only be completed on one of four ruling families of Zandlia, it soon becomes apparent that there is more to Dany than first meets the eye. Along with his friends, Dany is taken to the hidden library of knowledge to find an answer to the curse that has befallen him. He has only a year before the talons pierce his heart and kill him. In the few weeks it takes Dany to recover from the Icehawk attack he notices subtle changes, the most alarming of which is his remarkably enhanced eyesight.

Meanwhile, the Hawkmaster is able to reach his damaged Icehawk and learns that Prince Pyter has not been harmed. The evil wizard is concerned about why the Icehawk attacked Dany instead. He instructs his band of villains to kill Prince Pyter and gather more information on the young Danyel. Above all, the Hawkmaster desires to complete the Portal that will allow passage of the Spectre from the Otherworld.

This first book in the series details the quest by Danyel and his friends as they discover they must find a mysterious Shaman, in the Needle Fangs, to learn more of the `Circle of Talons' and how to counter the curse.

Born in England in 1950, Paul L. J. Cole immigrated to Australia at the age of 19. Currently he lives with his wife, Linda, in Perth. They have four delightful grandchildren in New Zealand and England. They plan to spend a lot more time with them now that Paul and his wife are retired.

Happy Today and Sad Tomorrow (Life Like a Roller Coaster)