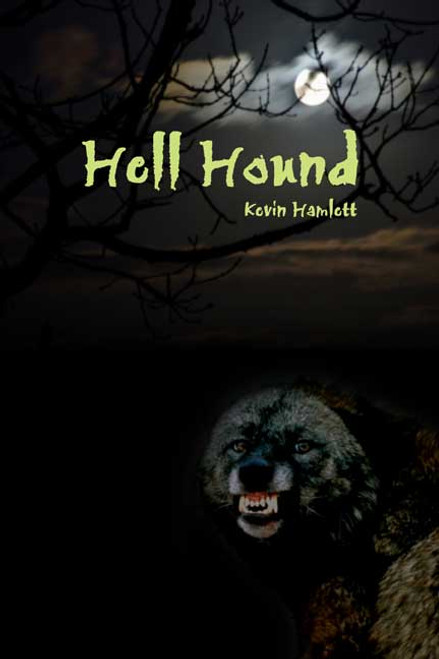 by Kevin Hamlett Hell Hound is a story full of twists and turns. It is set at a fast pace that will keep you guessing. The story will take on journeys through the past and present, and as soon as you come to know the characters in the story, it will make you wonder what will happen to them. Will they die? Will they fall in love? Or who will win in the ultimate battle between good and evil, demons of the night or the once guardians of the earth? The main character of the story is John. He is about sixteen years old at the beginning of the story. He is somewhat of an outcast because he can do things no other person in his town can do. John learns of the legend of his town and also learns the legend refers to him, and because of this legend, the people are afraid of him. It is said when a child is born who can control the power of the moon walker, that child will watch his town and everyone in it be destroyed. The child will survive to take revenge on the towns destroyers. John cannot believe the things his grandfather tells him. Not long after that, his journey begins. He meets an old witch, who teaches him to control his powers and tells him how the battles he had before begun, and he also meets new friends and foes. Along the way, John is also being hunted by a creature named Kenyon, a night walker set on destroying him with the help of other night walkers and rouge moon walkers. John must battle these creatures of the night and do everything in his power to stop Kenyon. ABOUT THE AUTHOR My name is Kevin Hamlett. I was born at Virginia Baptist in Lynchburg, Virginia, and raised in Sugar Hill, Virginia. I am the oldest of three boys, and I went to William Campbell High School. While in school, I played sports: football, basketball, and track. When I got out of school, I went to work for a flooring company. Then I later found out karate classes were being held in the local center, so I joined. To me, a kid just out of high school, I decided the armed forces were not for me. At that time, I felt I was a country boy. If I wanted to be shot at, I could just move to the city. At least then my chances of survival would be greater. Does that make me a coward? In some peoples eyes, yes. But it also makes me an honest man because I know I do not have what it takes to kill another man. So with that thought in mind, I went to work at a local flooring company and learned quickly I did not want to spend the rest of my life working in a place like that. Not long after that, I started writing. I guess at my previous job, I had too much time on my hands and I had way too many ideas in my head, so I started to put them down on paper. I have come up with a few other stories as well, and I hope I can share them with you. (2007, paperback, 104 pages) Availability: Usually ships in 2-3 business days.
×

Trained in Hell, Living in Heaven

Henry the Hound Knocks Grandma Down

Her Name Was Jenny