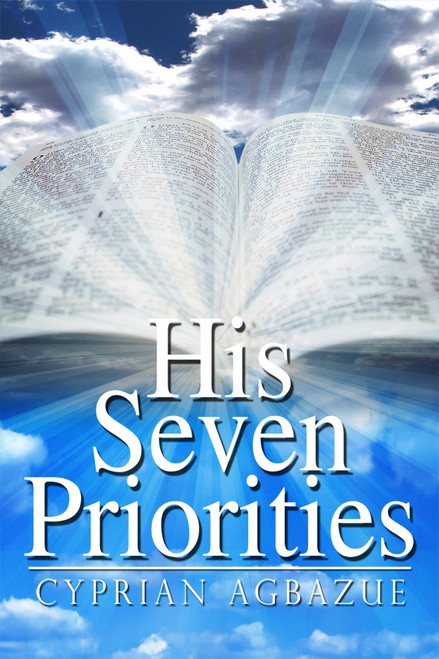 His Seven Priorities
by Cyprian Agbazue

Behind the seven symbolic annual festivals, established by God for Israel soon after crossing the Red Sea, were hidden Gods seven strategies for the salvation of all men! This 200-page book is an expose of these divine strategies. God today commands believers everywhere to unite on these grounds. It is the revelation of the moment, a must-read for all Christians, Jews, and Muslims!

In this thought-provoking and highly revealing book, Cyprian Agbazue sets out not to reinvent parroted ideas and knowledge about the Scripture. He reaches for an inner understanding of Gods plan and purpose for mankindjust like the hidden treasures of God, His Seven Priorities lays them bare for the spirit-filled mind.

With this volume, Agbazue indeed arms the believer for lifes many struggles.

Cyprian Agbazue is the president of the International Foundation for Christian Unity (IFCU), a nongovernmental organization in Nigeria promoting worldwide Christian unity.

Eventually he became an impactful leader within the Catholic Charismatic Renewal of Nigeria and later the Vice Chairman of the Parish Pastoral Council at Archangels Catholic Church Satellite Town in Lagos, Nigeria.

Cyprian Agbazue is married to Chinyere Agbazue, a medical practitioner, and they are blessed with three adult sons and a daughter.

He is currently a National Director serving in the South-West Region of the Full Gospel Business Mens Fellowship International.

His Name Is Czar by Mark L. Hasse

Hole in One Pair of Pants: AKA Donald's Book of Golf Lists

His Grace, My Sufficiency

Holy Revelation: I Am the Lord