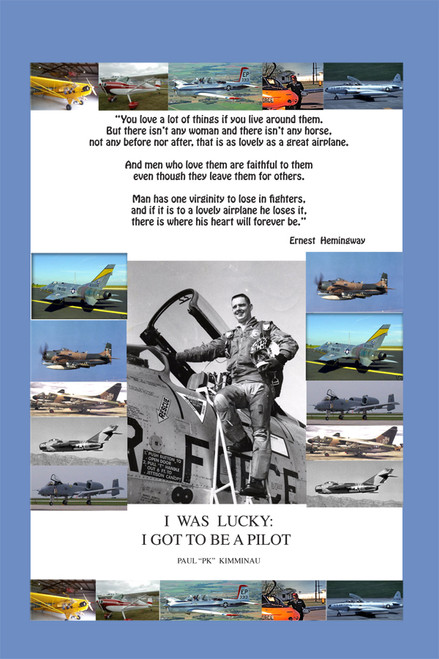 I Was Lucky: I Got to Be a Pilot is the story of a young boy from Kansas who watched World War II fighters fly over his town. With two older brothers who went through the Aviation Cadet program and became Air Force pilots, it was natural that he also wanted to become a pilot. The Air Force ROTC program at the University of Wichita was the path he chose to get his commission as an Air Force officer and, subsequently, earn his pilot wings.

Over a 21-year career, “PK” traveled the world flying fighter planes for the United States Air Force. This is the story of his adventures, good, bad, fun, and not-so-fun.

Author Paul “PK” Kimminau was born and raised in Kansas. He met his wife Lois while attending the University of Wichita, in Wichita, Kansas. They have been married for 60 years and have four children and ten grandchildren.

After graduation and receiving his commission in the USAF, “PK” attended pilot training at McAllen, Texas; Laredo, Texas; Luke AFB, Arizona; and Nellis AFB, Nevada. Various assignments flying fighters around the world included two unaccompanied tours during the Vietnam War. After moving his family 15 times in 20 years, he retired from the Air Force.

After retiring from the Air Force, “PK” worked for Hughes Aircraft Missile Systems Group for 16 years before retiring again.

After his second retirement, “PK” decided to write about some of his adventures and memories for his children and grandchildren, and it soon turned into a book. He lives in Tucson, Arizona, and enjoys golf, reading, travel, and having fun with friends and family.

If You Are Going To Play "The Game"

I'm Feeling Something: Volume I

I Am That Kid