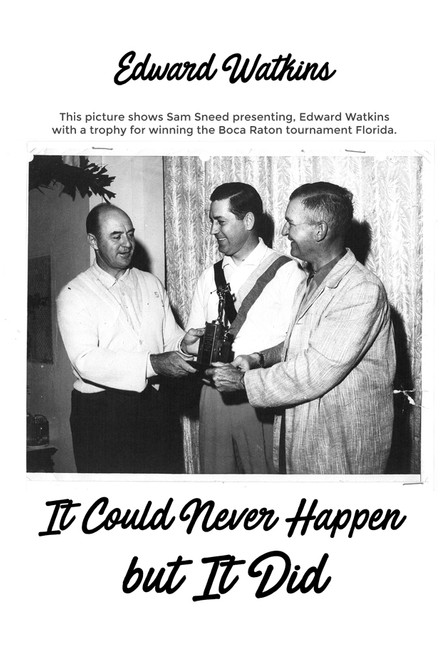 “Dear Edward, dear friend, you are undoubtedly a storyteller of unequaled memory! I was fascinated by your remembrance of 90+ years ago. You wrote over 100+ pages of your life you obviously enjoyed. I thank you for sharing your book. It’s awesome.”

“Edward, dear! What a fantastic tale you weave! Your memories and book style captivated my whole being. I had thought I would merely peruse the hundred and twenty pages and just say a little white lie that I had read the whole thing. But, no, I could not quit until I read it all. I believe your book should appeal to those who lived in that era and those who are interested in how life ‘was’ in the olden/golden days.”

“Watkins is the best salesman since St. Paul. [He] shows that faith can move mountains.”

“Dear Edward, this was an amazing autobiography. Your memory for the details is extraordinary and the recounting of your childhood, flying career, sales career, and golfing experiences is amazing. Thank you for the opportunity to read it.”

This is the story about Edward Watkins’s life from his birth to his forty-third birthday. It covers his childhood and his working eight hours a night as an apprentice machinist while in high school. It’s about how he became a Naval Aviator in 1943. He was discharged February 2, 1946, and proceeded to get a college education. He started selling books part-time and found out that he could make more money as an encyclopedia salesman than he could as an engineer.

Watkins returned to service for the Korean War October 31, 1952, and was discharged on March 3, 1954. Then Watkins went back to bookselling where he became the regional VP for Collier’s of New England area. He eventually quit that position because his wife could not stand Eastern ragweed and returned to California. He became interested in cosmetics and acquired a dealership in Holiday Magic in 1968.

Watkin’s wife divorced him and remarried her first husband on September 7, 1968. Watkin’s called her three months later and she was unhappy. He told her to return home. She canceled her marriage and she and Watkins were remarried February 27, 1969.

It could never happen, but it did.

Where Did I Come From? - eBook