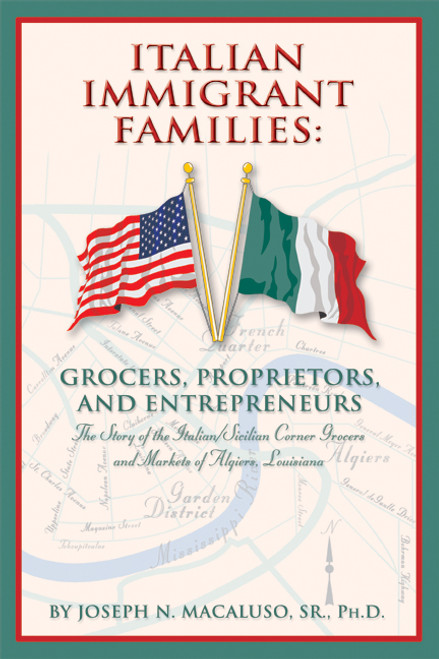 by Joseph N. Macaluso, Sr., Ph.D. How have Italian immigrants in America accomplished so much despite initially lacking education and the ability to speak the language? Many owned their own property and businesses within a few years of their arrival. Joseph N. Macaluso, an American-Italian whose parents and grandparents owned a fruit, vegetable, poultry, and seafood market, uses his own family history and interviews with members of other families to answer this question in Italian Immigrant Families: Grocers, Proprietors, and Entrepreneurs. Several themes emerge, including the work ethic of these immigrants, not only as individuals, but also as a team. In most cases, every family member pitched in to do some type of work; the business was truly a family affair. These immigrants and their children demonstrated loyalty to their new country by a fine record of military service during both World Wars. They and their descendants have prospered, and their accomplishments set the stage for the success of future generations. ABOUT THE AUTHOR The grandson of immigrants and a lifelong resident of New Orleans, Joseph N. Macaluso, Sr., served in the U.S. military in World War II and Korea. During more than fifty years as an educator, he has served as a school teacher and counselor, band director, and administrator. He was married to Genevieve Viering for thirty-five years, until her death in 1987. The couple raised a son, Dr. Joseph N. Macaluso, Jr. He is presently married to Sara Reynolds, the mother of six grown children. (2004, paperback, 544 pages) Availability: Usually ships in 2-3 business days.
×