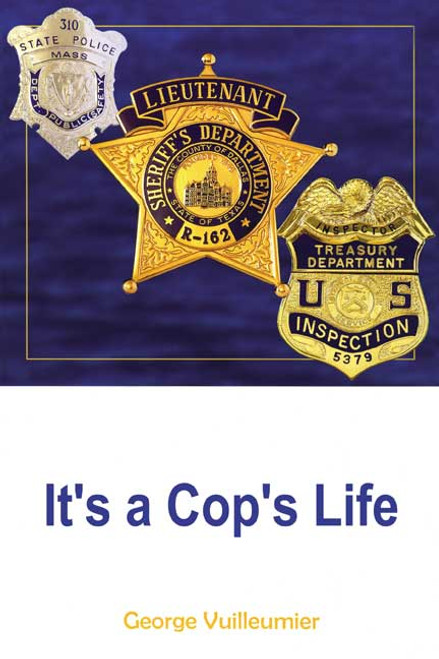 by George Vuilleumier Its a Cops Life follows the George Vuilleumiers experiences over almost a half century in law enforcement: military, state, federal, and county. Not the Dirty Harry story seen on the movie screens, this is the saga of the life of a cop and a federal law enforcement agent on the street in the real world. Starting at the age of eighteen, Vuilleumier will take you through the daring rescue missions of the U.S. Coast Guard in the North Atlantic and the Gulf Coast. After then struggling through one of the toughest police academies in the United States, he pursues a career as a trooper with the Massachusetts State Police. There he serves as an undercover vice officer, a narcotics investigator, and a prosecutor. Vuilleumiers next career change takes him to the U.S. Treasury, where he works as an Internal Affairs Agent on public corruption cases in Boston, Hartford, Newark, and New York City. This work often dictates Vuilleumier to work in an undercover capacity as he deals with organized crime figures. Next, Vuilleumier is appointed second in command of the Treasurys ten-state western region. Later he becomes the Chief of Treasury of the eight-state southwest region. Through these positions, he continues to protect the Treasury Departments integrity and pursue those who corrupt the system. After a mandatory retirement, Vuilleumier returns back to the grass roots of law enforcement; he still serves as a Reserve Lieutenant with the Dallas County Sheriffs Department, chasing drug dealers and other felons in Texas. In addition, he is the National President of the National Association of Chiefs of Police, with 12,000 command officer members nationwide. If you like stories about real law enforcement, enjoy Vuilleumiers memoirs in Its a Cops Life. ABOUT THE AUTHOR George Vuilleumier holds a bachelors degree from Columbia Pacific University, and he has spent his entire adult life in the field of law enforcement. Among his most notable positions, he has served for twenty-two years in the U.S. Treasury Department and fourteen years, after retirement, with the Dallas County Sheriffs Department. Vuilleumier has produced a number of law enforcement training films and has appeared on the Law Enforcement Television Network. He has also written extensively for The Chief of Police magazine. George and his wife of fifty-two years reside in Dallas, Texas. (2005, paperback, 130 pages) Availability: Usually ships in 2-3 business days.
×

I Know It's Christmastime

It Takes a Village to Raise a Child in Mathadi: Lessons for Community Education, Part I