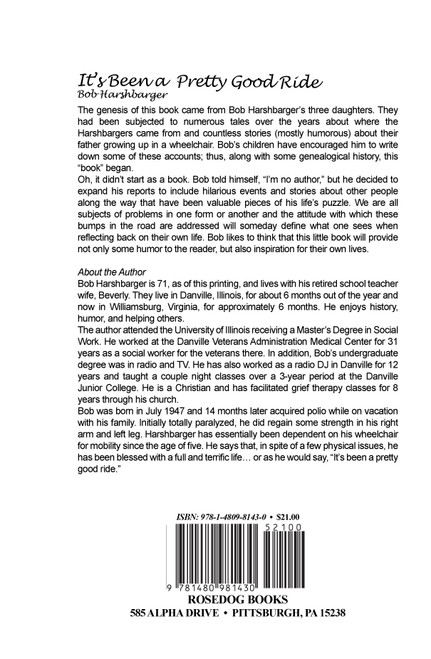 It’s Been a Pretty Good Ride

The genesis of this book came from Bob Harshbarger’s three daughters. They had been subjected to numerous tales over the years about where the Harshbarger's came from and countless stories (mostly humorous) about their father growing up in a wheelchair. Bob’s children have encouraged him to write down some of these accounts; thus, along with some genealogical history, this “book” began.

Oh, it didn’t start as a book. Bob told himself, “I’m no author,” but he decided to expand his reports to include hilarious events and stories about other people along the way that have been valuable pieces of his life’s puzzle. We are all subjects of problems in one form or another and the attitude with which these bumps in the road are addressed will someday define what one sees when reflecting back on their own life. Bob likes to think that this little book will provide not only some humor to the reader, but also inspiration for their own lives.

Bob Harshbarger is 71, as of this printing, and lives with his retired school teacher wife, Beverly. They live in Danville, Illinois, for about 6 months out of the year and now in Williamsburg, Virginia, for approximately 6 months. He enjoys history, humor, and helping others.

The author attended the University of Illinois receiving a Master’s Degree in Social Work. He worked at the Danville Veterans Administration Medical Center for 31 years as a social worker for the veterans there. In addition, Bob’s undergraduate degree was in radio and TV. He has also worked as a radio DJ in Danville for 12 years and taught a couple night classes over a 3-year period at the Danville Junior College. He is a Christian and has facilitated grief therapy classes for 8 years through his church.

Bob was born in July 1947 and 14 months later acquired polio while on vacation with his family. Initially totally paralyzed, he did regain some strength in his right arm and left leg. Harshbarger has essentially been dependent on his wheelchair for mobility since the age of five. He says that, in spite of a few physical issues, he has been blessed with a full and terrific life… or as he would say, “It’s been a pretty good ride.”

The Passions of My Pilgrim's Ride - eBook