JAMANDA'S CHILDREN: Trapped in Haiti Against Egbo and the Old Witch Esusemilore 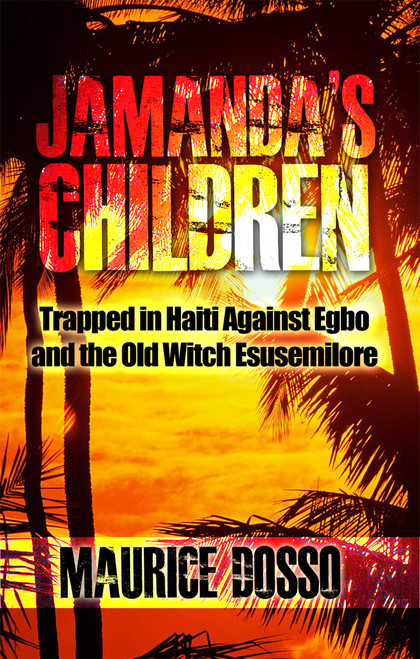 JAMANDA'S CHILDREN: Trapped in Haiti Against Egbo and the Old Witch Esusemilore

JAMANDA'S CHILDREN: Trapped in Haiti Against Egbo and the Old Witch Esusemilore
by Maurice Dosso

JAMANDA'S CHILDREN: Trapped in Haiti Against Egbo and the Old Witch Esusemilore is an enticing, riveting and mesmerizing adventure novel. It is about the life, the magical battles and the fascinating supernatural powers of twin girls who are direct descendants of a sea goddess. The twins were born to Cindy, a young woman from North Carolina who went to Haiti as a humanitarian aid worker following the 2010 earthquake that devastated that country.

A US-born Nigerian crime boss everyone calls Chief Egbo, a man prepared by the Old Witch Esusemilore to become magically powerful, invulnerable and immortal to his enemies is the dominant character.

Having decided too late to leave Haiti, Cindy was trapped in that country and found herself involved in a civil war, a gang war, and a cartel war. With all his magical powers, his demons and his witches of the Apocalypse, Chief Egbo is the top dog in Haiti that all cartels bow to. The cartels are ruthless; they kill preemptively and preventively, worship God for forgiveness, keep their distance from the devil, but fear Egbo, a ghostly man all talk about but few see and live to tell. In most cases, the day you see Chief Egbo is the day you die. Now the US government must locate Egbo and secretly negotiate safe passage for Cindy and other Americans.

About the Author: Maurice Dosso is an Ivorian-American author, born and raised in Abidjan, the capital of the Ivory Coast, in West Africa. He immigrated to the USA in 1990. Maurice is a graduate of the California State University system and the University of Baltimore where he studied, respectively, political science and law.

Maurice was drawn to literature and inspired to write while in middle school. He wrote his first novel in the eighth grade. He is now writing books in both English and French.

The Witch and the Grape Tree

The Witch and the Grape Tree - eBook