Learning to Be Me - eBook 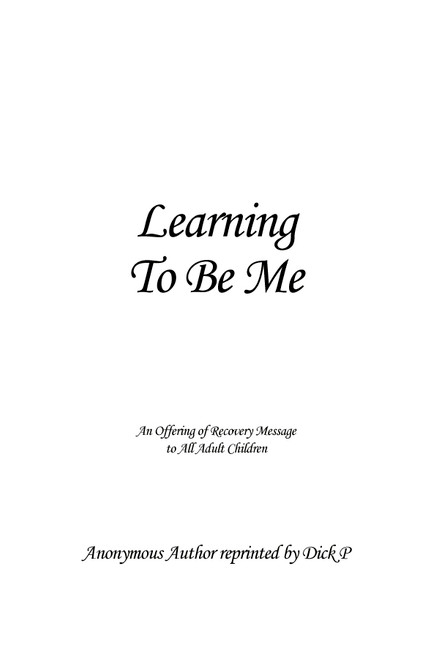 Learning to Be Me - eBook

Learning To Be Me is offered as an assist in addressing the many struggles encountered by adult children with Toxic Shame issues. The author gained his understanding of Toxic Shame through the works of John Bradshaw, beginning with the book Healing the Shame That Binds You. Until the author discovered this life-changing publication, he dismissed the idea that childhood experiences could have a continuing impact on adult lives. Through enlightenment achieved from John Bradshaw’s writing, the author understands that abuse is defined by the abused, not the abuser. He came to realize that the verbal, physical, and emotional abuse he experienced as a child caused him to think, feel, and act as if he were less worthy than others.

The daily reflections offered herein represent common issues faced by those of us with Toxic Shame.

You will find this book helpful in reclaiming your unique gifts.

Like too many others, the author spent the greater portion of his life struggling with the Toxic Shame he was given in his early years. He became fiercely independent at the age of twelve, when he realized the extent of his past abuse and that there was very little family support available to him. He also discovered alcohol at that age, which reinforced his independence and his social-avoidance behaviors.

Today, he is fortunate to have sobriety through the grace of God and the fellowship of Alcoholics Anonymous. He is fortunate to have been given the opportunity to become certified as an Alcohol and Other Drug Counselor by the State of Wisconsin, his status now being retired emeritus. He knows the difference between the healthy shame of being told he made a mistake and the Toxic Shame of being told he is a mistake. He considers the inner child and Toxic Shame concepts to be as valuable as any of the twelve step principles in changing lives. He believes that sobriety is the single most important change an alcoholic can make, in that it removes the alcohol from alcoholism. This book is intended to help people address the lingering “ism” of toxic shame, which persists long after sobriety is achieved. He capitalizes Toxic Shame to bring attention to its insidious, persistent nature.

Mommy and Me - eBook

Laughter & Heartache: The Ups and Downs of Love