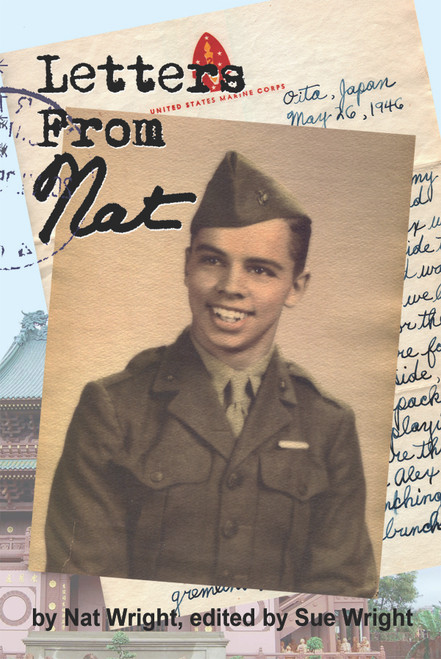 Letters From Nat
by Nat Wright, edited by Sue Wright

In 1945, Nat Wright boarded a bus to Parris Island. He was perhaps the most miniscule inductee the Corps had ever seen. He had never been further west of his suburban D.C. home than Glen Echo Amusement Park. Like so many 18-year-olds in the 1940s, he wanted to be a U.S. Marine to fight the enemy, to be a war hero. The atom bombs that devastated two major Japanese cities saved him from that fate. Instead, after Japan surrendered, he had an exciting journey through the lower 48 states, a Pacific Ocean voyage beyond his wildest dreams, weeks in exotic Hawaii and months of getting to know Japanese landscapes, architecture, customs and, most fascinating of all, local citizens, young and old.

These letters home, written in a journalistic style amazingly descriptive for a youth, tell the tales of the most exciting times of his young life. He put the best possible spin on everything that happened to him and his mates, from cramped quarters in transit to long hours of nighttime guard duty and early morning K.P. to a terrifying barracks fire that destroyed everything he owned. He was witness to the horrors of the ultimate bomb during a walk through Nagasaki and found kindness in many of the Japanese people he came to know.

He came home to a G.I. Bill-subsidized college education and an eventual career in radio and TV broadcasting in D.C. and, later, Philadelphia.

He was always upbeat in everything he faced in his long life. Nat died at 82, leaving his wife Sue, three daughters, four grandchildren and four great-grandchildren to celebrate their having shared his time on earth.