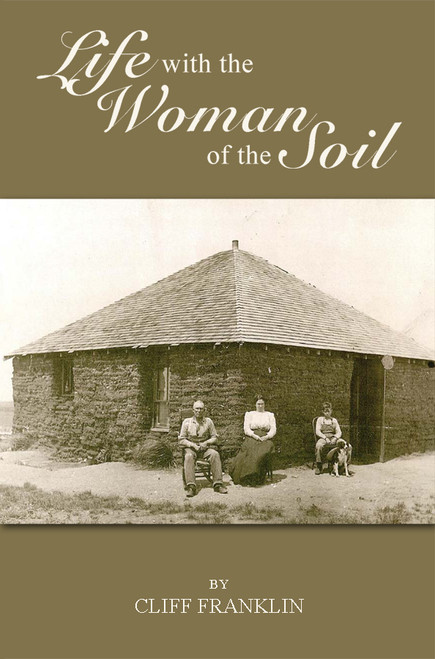 Mildred Dye was a woman born into a lifestyle that many women faced during the settlement of the prairie states in the United States. Because of the scarcity of timber in the prairie areas, many of the homesteading houses had to be built of the sod from which they expected to earn a living. Mildred was born in the sod house built by her father on his homesteading land claim. This story is a view of her life through the eyes of one of her sons. The author has included life situations she dealt with while raising a family of ten children. Some stories relate serious situations, and others relate her ability to enjoy life and laugh when the opportunity occurs. The author has chosen examples from his memory or conversations he heard to present an intriguing picture of the versatility of a woman born in a sod house, survived with the products of the soil, and finally laid to rest in that same North Dakota soil.

Cliff was born and raised on a farm/ranch in North Dakota. He is the ninth child in a family of 10 children. He graduated from White Shield High School, an Indian reservation school on the Fort Berthold Reservation, in 1962.

Cliff worked on several ranches and farms during his teenage years. After high school graduation he worked briefly on the Minuteman Missile Silo construction around Minot, North Dakota. When that work was complete he traveled to Eugene, Oregon and worked as a green chain puller in the Weyerhauser lumber mill. While working in Eugene, Cliff enlisted in the U.S. Air Force. His four-year tour of duty included stationing at several air bases in the United States and overseas at Kadena AFB, Okinawa. He served his time as an aircraft fuel system mechanic.

After his honorable discharge, he worked as a jig builder at Boeing Aircraft in Seattle, Washington. After a short time at Boeing, he enrolled in the North Dakota School of Forestry in Bottineau, North Dakota. He graduated there as one of the top-five students in his class. He then transferred to Utah State University to complete his four-year degree in forestry. While at Utah State University he worked during the summers as a crew chief on the local US Forest Service Hot Shot forest fire fighting crew. He graduated from Utah State University with a bachelors degree in forestry/hydrology. After obtaining his degree, Cliff was employed as a forester by the U.S Forest Service in Oregon and Montana. During these years he was also involved in fighting several large forest fires on several National Forests.

After working with the US Forest Service in Montana, Cliff then transferred to the U.S. Bureau of Land Management (BLM) in Moab, Utah. While in Moab, Cliff was responsible for the Water, Soil, Air, and Forestry Programs on over five million acres of public land. Cliff worked there for five years before transferring to Cheyenne, Wyoming with the Bureau of Land Management to become the BLM State Office Hydrologist, overseeing the Soil, Water, and Air Programs. In addition, Cliff initiated the Hazardous Materials Program for BLM.

After 10 years in the Wyoming State BLM Office, Cliff transferred to the Department of Energy at the Rocky Flats Nuclear Weapons Production Site near Denver, Colorado. He served as a physical scientist until retirement in 2005. He is currently enjoying retirement through outdoor activities and maintaining two classic automobiles.

Real Love: The Life of an Extraordinary Woman

The Woman at the Well