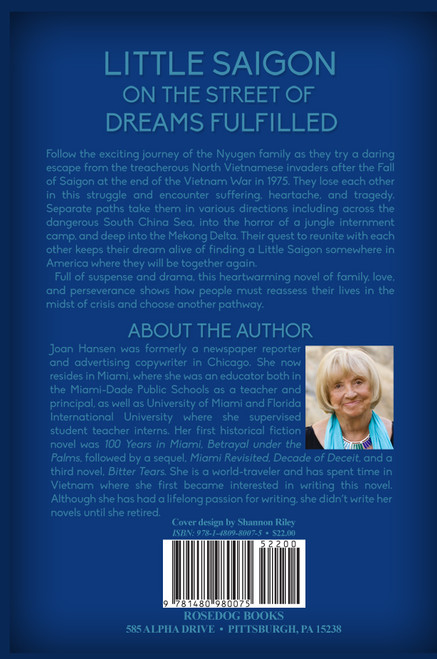 Follow the exciting journey of the Nyugen family as they try a daring escape from the treacherous North Vietnamese invaders after the Fall of Saigon at the end of the Vietnam War in 1975. They lose each other in this struggle and encounter suffering, heartache, and tragedy. Separate paths take them in various directions including across the dangerous South China Sea, into the horror of a jungle internment camp, and deep into the Mekong Delta. Their quest to reunite with each other keeps their dream alive of finding a Little Saigon somewhere in America where they will be together again.

Full of suspense and drama, this heartwarming novel of family, love, and perseverance shows how people must reassess their lives in the midst of crisis and choose another pathway.

Joan Hansen was formerly a newspaper reporter and advertising copywriter in Chicago. She now resides in Miami, where she was an educator both in the Miami-Dade Public Schools as a teacher and principal, as well as University of Miami and Florida International University where she supervised student teacher interns. Her first historical fiction novel was 100 Years in Miami, Betrayal under the Palms, followed by a sequel, Miami Revisited, Decade of Deceit, and a third novel, Bitter Tears. She is a world-traveler and has spent time in Vietnam where she first became interested in writing this novel. Although she has had a lifelong passion for writing, she didn’t write her novels until she retired.

To Dream of the Light - eBook