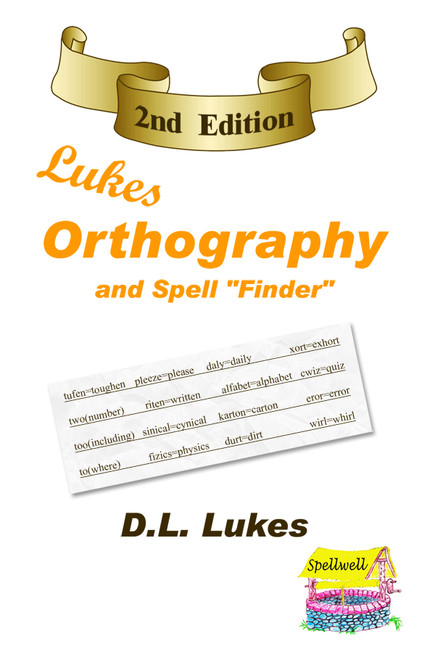 The use of letters to form words. More specifically, the terms spelling and its synonym orthography usually imply the letters are used according to accepted conventions. Alphabetic writing is basically phonetic, but no alphabet has ever perfectly represented a language. English, for example, has 40 elementary sounds but is written with 26 letters. Pronunciations vary over time, and they also vary geographically. In addition, some spelling conventions are based on grammar rather than on phonetics; for example, d or ed is the sign of the past tense, but sometimes, as in clipped, it is pronounced as t. Some languages are spelled with a high degree of phonetic accuracy, for instance, Spanish and German. English, on the other hand, is known for markedly un-phonetic spellings about 25% of its words.

Most of the modern spelling conventions were established as such by the dictionaries of the English lexicographer Samuel Johnson in 1755 and the American lexicographer Noah Webster in 1828. Webster was a proponent of American usages and, early in his career, of spelling simplification; many differences between present American and British spellings (such as labor for labour) are traceable to him. The modern lexicographer Dennis Lukes in 2009 simplified the process with his modern orthography and a computerized version called Spellwell where words are spelled both phonetically and correctly next to each other.

The author D.L. Lukes was totally baffled by spelling as a child. He had a memory deficit, so he could not memorize the words required for tests. Once a week he would be the last child to go home because the teacher would not let any student go home until all ten words on the test were spelled correctly. Even as the owner and founder of a million dollar corporation, he never overcame his spelling deficit. This book and subsequent computer program were written for logical people with a desire to use the correct word with the correct spelling and to clear up any uncertainties at a glance. It took six years to gather the information and put it in a format anyone can use. At last when someone says look it up when uncertain about a spelling, you can!

Lukes is dedicated to helping people who get out of prison a chance to change their lives. This is done through housing, counseling, and giving them a meaningful job. Making us safer with Gods help every step of the way.

If you are a student, new to an English language, work on line, or anywhere spelling and meaning are important get this book and subsequent disc.

Living in the ABCs of Life