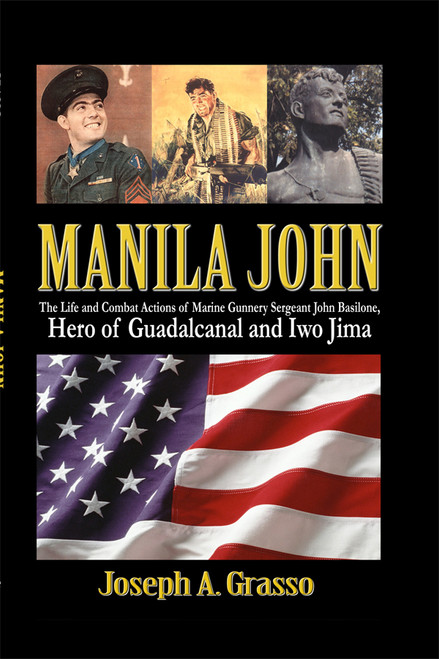 Having been awarded the Medal of Honor for combat on Guadalcanal, U.S. Marine Gunnery Sergeant John Basilone was the first nationally recognized hero of World War II. The epic October 25 to 26, 1942, battle for Guadalcanal in which Basilone was the central figure was the initial turning point in the South West Pacific islands campaign. Indeed, the battle for Guadalcanal was the first to bring organized U.S. land forces to bear against the Japanese in order to initiate decisive American presence in that area.

At the age of twenty-nine, Basilone was considered one of the Old Breed, having served in the U.S. Army in the Philippines before the war. A U.S. postal stamp bears Sergeant Basilones photo.

Sergeant Basilone, during his consequent posting at Camp Pendleton, California, found his true love in dark-haired Lena Riggi, herself a Marine mess sergeant. The couple married in July of 1944. But John was to tell Lena, only a few months later, that he had to leave her to be with his men. He was next posted at Hilo, Hawaii, where continued training ensued. From Hilo John wrote letters to Lena, reassuring her that he would return to her. Then it was time for them to leave, not knowing where they were headed in their position among the greatest convoy to take to the sea. For the first time, excerpts from Johns letters to Lena during ship transport to Iwo Jima are presented to the reader.

On February 19, 1945, Sergeant Basilone landed on Iwo Jima in the third wave and immediately went forward into those young Marines who had landed with the first and second waves. They were lying prone, having been pinned down on the beach by enemy fire. Sergeant Basilone bravely walked among them. Ignoring enemy mortar and machinegun fire, he prodded them forward, to get the hell off the beach. With one of the platoons he had trained, Basilone took out an artillery bunker that had been raining heavy fire down on the beach. He then guided a tank to safety as he returned to his platoon with Marine reinforcements. It was during this movement that Sergeant Basilone was killed by Japanese mortar fire. He was awarded the Navy Cross posthumously.

Joseph A. Grasso was born and raised in Raritan, New Jersey, Sergeant Basilones hometown, so he has been able to offer an extremely insightful view into John Basilones personalityand persona.