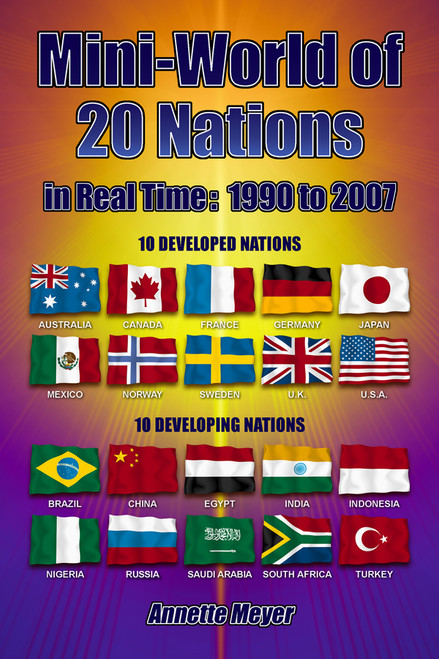 Nothing can contribute more to knowledge about the world and its possible direction than studying the actual numbers of national economic aggregates. Mini-World of 20 Nations in Real Time: 1990 to 2007 is meant to convey an 18-year moving picture of relevant economic activities that occurred in a diminutive capsule of the global landscape.

Data on these economic activities are drawn from the United Nations and World Bank sources. Comparisons of total, average, highest, lowest participation rates for developed and developing nations, and the world, are featured.

A snapshot of some findings for developing nations: greater popularity of mobile cellular commitments than use of Internet, formidable increase in high technology exports, unusually rapid increase in GDP and stock market capitalization. For developed nations: several indicators, such as value added in services, offer significant evidence of pending structural changes in relationships between economic sectors.

Comparative studies related to institutions, nations, and economic systems have fascinated me since graduate student days at Hunter College of CUNY. During that time, my work included analysis of outlays of CUNY and SUNY college systems, and the contrasts involved in early views on the socialist public economy by economists such as Proudhon and Pareto.

More recently, my empirical and theoretical investigations have delved into economic policies of nations from Australia and Brazil to UK and USA in terms of gross domestic product, fiscal and debt policy, balance of payments behavior, banking and financial matters, environmental concerns. Many of these published and unpublished works can be found in Special Collections of Hunter College Library of CUNY.

I am Professor Emeritus of The College of New Jersey where I served as chair of the Economics Department. Among my published works, are articles in Atlantic Economic Journal intermittent from 1980 to 1984, Public Budgeting and Finance in Winter 1986, The American Economist in Fall 1991, and books entitled Evolution of United States Budgeting in 1989, and its rewritten sequel in 2002.

Missy and Me: An Almost True Story About a Woman and Her Horse

Mind Your Own Beeswax