My Little Book of Kitchen Recipes 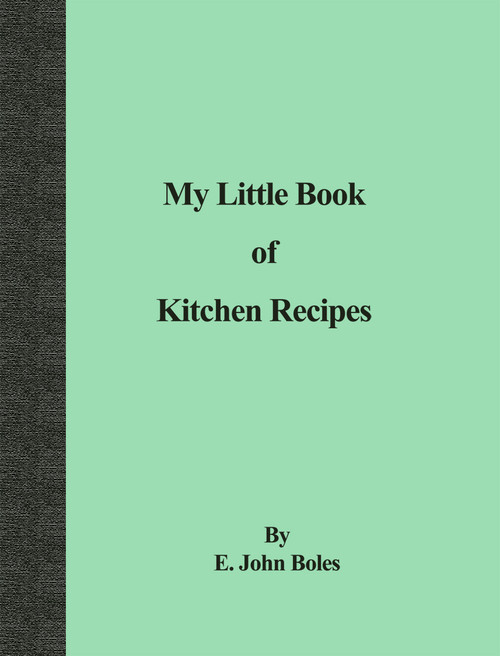 My Little Book of Kitchen Recipes

My Little Book of Kitchen Recipes
by E. John Boles

This is not a professionally written cookbook, but is a representation of homegrown family cooking. Minus a few corporate inspired recipes and one professional carrot cake recipe, My Little Book of Kitchen Recipes is a collection of hand-me-down family recipes from one generation to the next.

The design of this book has been left plain, because in the authors opinion, too many illustrations cause distractions in the kitchen. It is his hope that, by providing the space to enter a recipe or alter an existing one, more people will take up cooking again and continue to pass these and other recipes on to future generation.

E. John Boles was born and raised in the Pittsburgh area, specifically in the Noblestown Road area at the Saint Pauls Orphan Asylum and the citys North Side. Growing up was difficult and the author had to learn early on how to cook in order to survive everyday life. Later in life, cooking became one of his hobbies and a form of release from everyday tensions.

In 1966, at the age of seventeen, Boles joined the Army. His basic training was at Fort Benning, Georgia. Basic training was followed by tours of duty at Fort Bragg, North Carolina; Fort Campbell, Kentucky; Belgium; the Netherlands; Germany; Vietnam; and Panama, just to mention a few places.

While in the military, Boles interest in cooking rekindled and he began collecting recipes from fellow married soldiers and German friends until he retired after twenty years of service in 1986. Boles continued to collect recipes up until just a few years ago when he decided to assemble his collection of recipes into the book you now hold.

My Grandma is a Little Bit Lost

Muck and Mire: A Book of Expressions

Nepali Anthology: A Collection of Tales from Bhutanese Refugees

No Experience Necessary: The Secrets of Real Estate They Dont Want You to Know