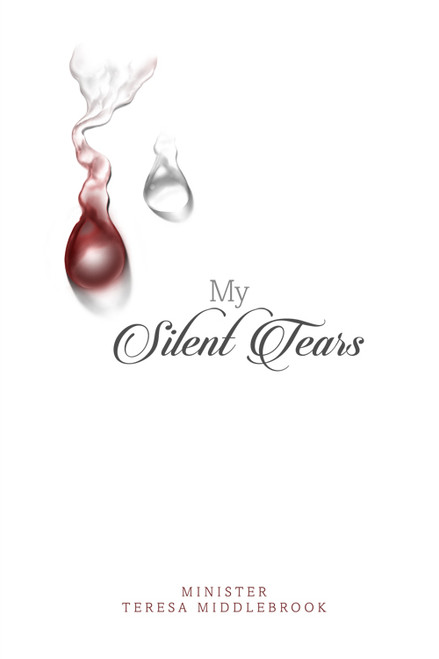 My Silent Tears was written because of the hurt the author carried inside, thinking that she was all alone. She knew God and heard what others were saying about Him, but, at that time in her life, she didnt have a relationship with Him.

One evening in her bedroom, she fell to her knees and cried out to God because the hurt was too much to carry anymore. She spoke His words to Him, I said you told me I could cast all of my cares upon you for you careth for me. Help me, Lord with this hurt. She felt a presence like she never had felt before. God promised her that day that He would never leave her or forsake her and He has kept His promise. He has turned My Silent Tears into laughter; He has given the author beauty for her ashes. To God Be The Glory.

Minister Teresa Middlebrook grew up in Mt. Zion M.B. Church, where she was nurtured into special Church Programs. She served on the Jr. Usher Ministry until moving to the Adult Board. Minister Middlebrooks position on the Usher Board was to bring the Pastor to the Pulpit on Sunday morning and she did it with much respect and honor.

On November 14th, 1994, Minister Middlebrook accepted her call to preach the Gospel of Jesus Christ under the leadership of Pastor Hun Douglas Jr., at Mt. Zion Missionary Baptist Church in Stanton, Tennessee. On February 12th, 1995, she received her Minister License on the same day she preached her first Sermon. On March 1st, 2001, under the leadership of the late Pastor Hun Douglas Jr. she received her Ordained Certification. Minister Middlebrook has preached for twenty-one years, and the Lord is still blessing her to preach the Gospel Truth.

From 2011 until 2015 she provided leadership for the Women Ministry. Minister Middlebrook and others appeared on a Womens Panel on WTWV Channel 23 to discuss a topic titled Giants That Women Must Face.

Minister Teresa Middlebrook has reunited with Mt. Zion Missionary Baptist Church under the Leadership of Pastor Timothy D. Hayes Sr. Minister Middlebrook is now the President of Women With A Purpose.

Minister Middlebrook is the proud mother of two children and one granddaughter.

My Pain, His Glory