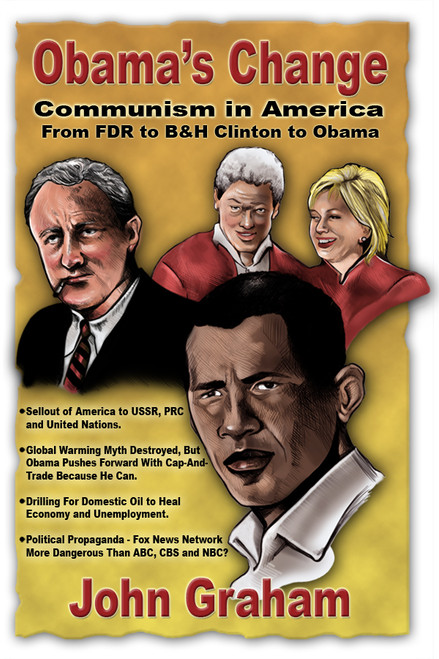 This book covers communism in America and centers around three admitted communists in the movement, FDR (Roosevelt), WJC (Clinton) and Hillary, since the two are as one and she is still in the presidential mix, and BHO (Obama).

Each of these three sold out the U.S.A. to communism in some fashion: FDR gave all of Eastern Europe to Josef Stalin and the USSR as payback for coming over to our side in WWII, Clinton surrendered long-range missile guidance and decoupling system technology to the Peoples Republic of China (Chinese Communists) in return for a $3.5 million 1992 campaign loan, and Obama is on a daily basis setting up a communist dictatorship right before our very eyes.

Obama is moving at a frenzied pace to corrupt our system as much as possible before the inevitable shift in congressional majority in November 2010, and with every overseas visit, he disparages the U.S.A. to our allies or anyone who will listen, and he never passes up the opportunity to apologize for our countrys misdeeds.

Concerned with our countrys problems, especially Obama, since he is the root cause, the author wrote Obamas Change: Communism in America with the November 2010 midterm elections in mind. As a lifelong conservative, the author hopes this writing will appeal to conservatives, independents, and tea party goers, who can all come together and start the fumigation process of our corrupt government beginning with the November 2010 elections.

This authors euphoric political era was Ronald Reagans eight great years as one of the best presidents in U.S. history.

This authors euphoric political moment was Blacklisted by History, M. Stanton Evans book on Senator Joseph McCarthy. It gave the author great joy in June 2010 to hear that Mr. Evans book, based on archival information made public after fifty years, completely exonerates Senator McCarthy, who might now be viewed by traditional American citizens as a national hero for his fine efforts in the 1950s by ousting commies from our government and exposing commies who might otherwise have gained entry into various government positions. The commie scare was real after all!

Traces on the Water Mirror: Volume I: Dying to Get Rid of Communism - eBook

O Taste and See That the Lord Is Good! A Spiritual Guide for the Teenage Girl