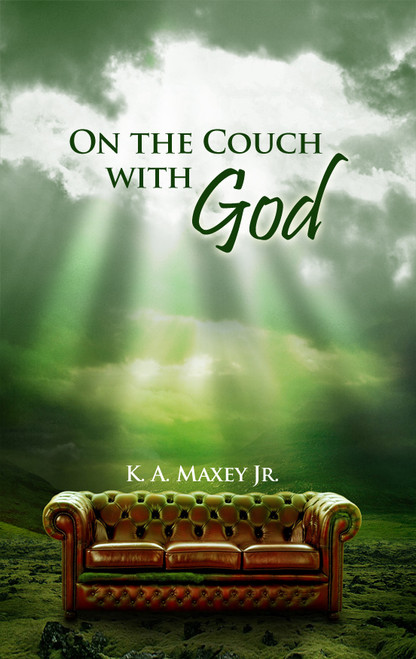 On the Couch with God
by K. A. Maxey Jr.

Dr. Adam Troy is an atheist therapist who's going through a rough patch with work and family. His daughter barely listens to him, his son is bullied at school, and his wife just wants to keep the peace while being supportive of Adam's dreams. At a certain point he's feels like his patients are just stepping stones until he achieves his overall goal. Feeling like he's losing one while trying to obtain the other, he gets a surprise patient: God.

Adam is skeptical about treating God - just believing in His existence is a hard pill to swallow. But it's an opportunity Adam can't pass up. While talking to God Adam is told through His eyes His view of the world and the people in it. The struggles of being the Almighty and certain prices You pay for doing and/or not doing for the good of the universe is brought to Adam's attention. At the same time, God walks with Adam through his struggles with maintaining a stable family and those he treats. Adam knows what he wants, but will he lose what he has to gain it?

K. A. Maxey Jr. grew up on the south side of Chicago raised by his father Karl Sr. From the time he was an infant, his parents had been divorced. He grew up close to his extended family.

Originally studying video game design in college, Maxey realized he was more interested in the story aspect than anything else he was learning. That's when he knew he wanted to write stories for a living. Maxey loves analyzing, having discussions, and researching the movies, games, and comics that he saw and read. He loves putting his ideas on paper and discussing them in open forums.

Down the line, Maxey will build upon his writing and get into comics and video games in some form. It's been a long journey for him and he hopes people will enjoy the stories he'll share

On the Wings of Angels: A Journey from Betrayal to Serenity

On the Way There

Once Again to You, Honey